Last night Park Slope parents got a look at the potential, controversial new school zone for the area and you'll be shocked to know they weren't all happy with what they saw. "My family bought a place in what we thought was P.S. 321," one parent complained. "Now we’d be put into a new school. We played by the rules; we bought in zone because we want to be in that zone."

Because of the intense popularity of PS 321, the city is proposing to shrink the zone that feeds into the school by about 10 city blocks. The biggest chunk would come from the southwestern corner of the zone, which would move the border north to First Street and east to Fifth Avenue, with those kids (as well as some from P.S. 39) being sent to a new school there. At the zone's southeastern edge, a chunk of the border would be moved to send some of those students 321 to 39. Meanwhile the borders for P.S. 107 and P.S. 10's zones would also shift. Here's the proposed map that the DOE showed last night: 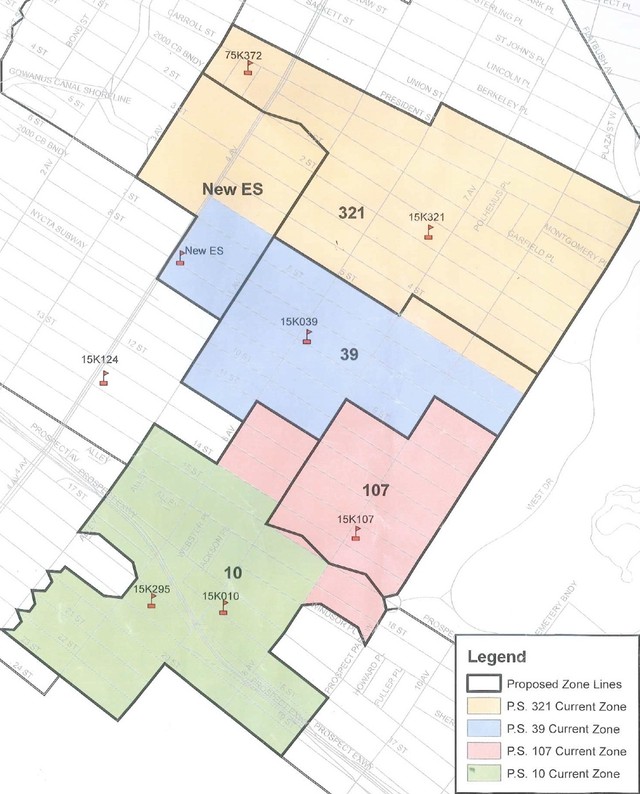 Parents who bought into the neighborhood specifically hoping to send their kids to P.S. 321 were clearly upset about the change, which could go into effect for the the 2013-14 school year. Especially when they say some parents are clearly lying to send their kids to the school: "There are people that rent for one year in the zone, move somewhere else, and somehow stay in the zone," one told the crowd last night. "I see streams of kids coming out of the subway, coming from who knows where, going to P.S. 321."

Another complaint last night was that the rezoning is just another way of segregating Brooklyn. One mother reportedly brought a Census map to the proceedings to prove her point. "I prepared this [map] because I had the sinking feeling that when P.S. 321 was made into a smaller zone, it would be the most racially diverse block group that would be eliminated, and sure enough, my fears have been confirmed," Leslie Uretsky said. "My block is 34 to 46 percent minority, and lo and behold we are the ones who are going to be forced into a new school."

The DOE's District 15 Community Education Council now has 45 days to vote on the proposed zoning changes—so this is not the last you'll be hearing about it.

#brooklyn
#department of education
#DOE
#park slope
#school zones
Do you know the scoop? Comment below or Send us a Tip