South Bronx residents and environmental advocates say a roughly four acre plot of city-owned land along the Harlem River was promised as park land over a decade ago, as compensation for the new Yankee Stadium and surrounding parking lots. Now, they're pushing back against a city plan to develop that land into mixed-income housing instead.

"The master plan had a kayak launch there, a recreation center, a skateboard park, and a big green lawn," said Geoffrey Croft of NYC Park Advocates, who is pushing for park land on the site. "And Bloomberg didn't fund it, and [Mayor] de Blasio thought it was ripe for the taking."

The site is located in Mott Haven just south of 11.5-acre Mill Pond Park, which opened in 2009 as partial compensation for more than 25 acres of public land lost to Yankee Stadium. The New York City Economic Development Corporation first put out a request for developers last summer, and made a pitch to local Community Board 4 late last month. At that meeting, the city announced its intention to create 1,045 units of mixed-income housing, as well as commercial and community space.

The development is part of a larger $200 million city investment in the area.

The EDC's CB4 presentation calls for a percentage of below-market rate housing. Half of this housing would be for families who make less than 80 percent of the Area Median Income, according to EDC. The plan also calls for "new Harlem River open space." 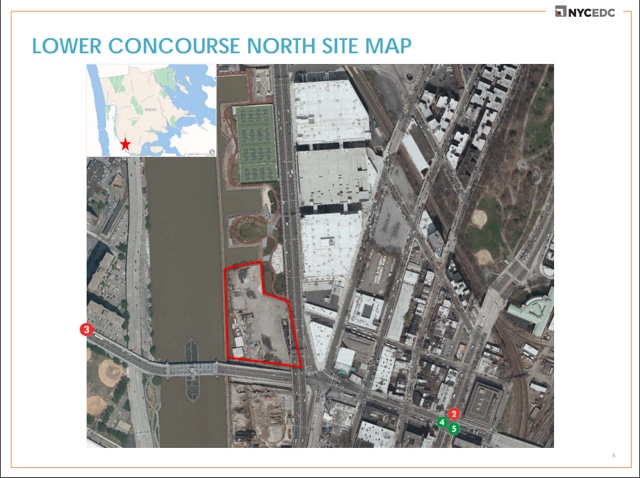 The proposed development site (via EDC).

But advocates say the plan falls short of the city's promise, pointing to a map posted at Mill Pond Park with the area marked "Future Park Extension."

"You can even go to the park itself, look at the map, and it says 'future park land,'" said Chauncy Young, 41, a High Bridge resident of 12 years who took part in visioning sessions for Mill Pond Park. "I don't want to see a promise broken."

The area was also designated as park land on the Parks Department website as recently as last summer, the blog Welcome 2 the Bronx pointed out. Mill Pond Park was also described as "15-acre park," though only 11.3 acres are currently park land. The size of the park is not currently listed online. The Parks Department did not immediately respond to a request for comment.

Stephanie Baez, a spokesperson for the EDC, said that the city has no documentation that the Pier 5 site was promised as park land.

According to Baez, the proposed development would add two acres of green space to Mill Pond Park. The city is also in the process of acquiring a 2.5 acre parking lot on 144th Street for additional green space, she said.

Karen Argenti of the Bronx Council for Environmental Quality told Gothamist that the Parks Department controlled the land at least as recently as 2013, when her organization installed a pop-up wetland on the site. "It is a piece of land that should have been developed but they ran out of money," Argenti said. "They can say as much as they want that it's not park land. But the reality is that if it looks like a park and smells like a park, it's a park."

"They have these mall parking lots that are perfect to build housing," Argenti added, referencing the nearby Bronx Terminal Market mall.

The EDC plan "aims to address a booming population that needs both affordable housing and recreational space," Baez stated, adding "this project is an irrefutable win for South Bronx residents."

EDC said it has not determined how many units in the development will be below-market rate. A developer has not yet been selected.

Croft, of NYC Park Advocates, said the Mill Pond Park extension recalls other public open space debates in the city. In Brooklyn Bridge Park, for example, locals have fought the expansion of residential towers the city says are necessary to fund park maintenance. And in Williamsburg, the final parcels of the Bushwick Inlet Park were acquired over a decade late.

"As usual, park land is the step-step-step child of the government," Croft said. "When administrations promise park land, often these promises are broken."

Croft and other advocates met last week with City Council Speaker Melissa Mark-Viverito's land-use team, according to Croft. Advocates asked the speaker to use her influence to roll back the Uniform Land Use Review Process (ULURP) process on the site, and scrap the residential plan altogether.

"We are reviewing this proposal and meeting with all stakeholders as this project goes through the ULURP process," said Mark-Viverito spokeswoman Robin Levine.