Proposal Would Adjust Hours on Tickets for Littering 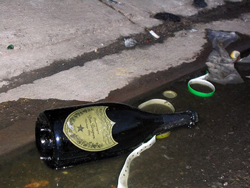 A bill before the City Council would limit the hours Dept. of Sanitation agents can issue building owners tickets for having trash on their yards or the sidewalk in front of buildings. Brooklyn councilman Simcha Felder introduced a bill limiting the hours that DOS enforcement agents can ticket New Yorkers for having litter in front of their property, claiming that it is unfair to penalize property owners for litter that appears when they are away from home and unable to collect and dispose of it. The New York Sun quotes Felder saying "The purpose is to finally rein in the ticketing blitz that takes place with sanitation enforcement."

The fines for litter in a yard or on a sidewalk (and this actually extends 18" from the curb into the street) range from a minimum of $100 to a maximum of $300. According to the Dept. of Sanitation's Digest of Codes [pdf format], enforcement agents currently can only ticket for dirty or litter-strewn sidewalks between 8 and 9 a.m., and from 12 to 1 p.m. Councilman Felder's bill would adjust those two one-hour periods to 8 - 9 a.m. and 6 - 7 p.m.

Felder introduced the bill in reaction to tickets his 87-year-old mother received for having litter in front of her building. We're guessing the litter in question was takeout menus, because tickets his mother received were also the inspiration for Felder's bill that he proposed back in April to ban delivery and takeout menus from being distributed to buildings with signs saying they don't want them. All good legislation begins at one's mother's doorstep apparently.

(Life In The Gutter Ain't So Bad, by thelexiphane at flickr)