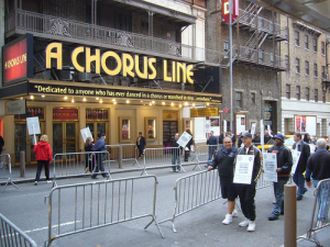 Yesterday Local One, the Broadway stagehands’ union, and the league of producers continued negotiations that had been stalled since last Sunday. Talks dragged on through the night and at 6:30am a union spokesman announced a 12 hour break. Though no details were given, it was said that “progress” had been made. An unnamed source told the Post that the two sides “had settled ‘the big issues’ and were continuing to hammer out details stalling a final agreement.”

With the strike now in its third week, business owners in the theater district are getting desperate, and none more so than local restaurateurs, who are now talking about staff layoffs. The Thanksgiving weekend, which usually guarantees hand-over-fist tips for waitstaff, was a dead zone. Antonio Zelarde-Dielma, the manager of Brazil Brazil, estimates an 80% drop in sales and overall losses for district restaurants have been in the tens of millions.

There was good news last week when a judge ordered the owners of the St. James theater to open up and let “Grinch” go on, but the increased foot traffic from one show is hardly enough to compensate for the 26 other shuttered productions. (Seven other Broadway shows are currently running because their theaters have separate contracts with the league: Pygmalion, The Ritz, Cymbeline, Young Frankenstein, Mary Poppins, Xanadu and The 25th Annual Putnam County Spelling Bee.) For some great family friendly theater alternatives, check out our off-Broadway family show guide, some of which are located right in the theater district.