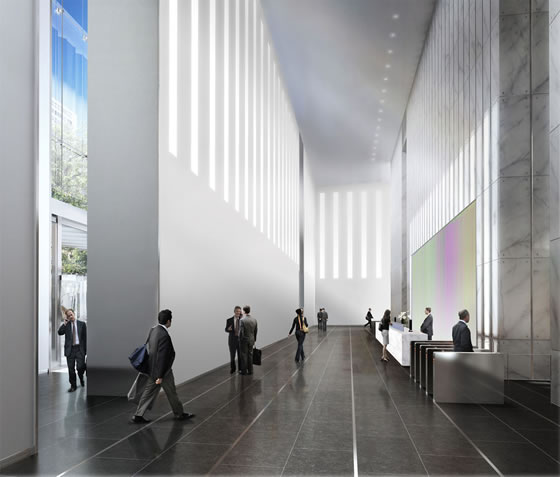 It's the future, now! The Daily Intelligencer posted this Skidmore, Owings & Merrill/SWIM rendering of Freedom Tower's lobby, and finds out from SOM's TJ Gottesdiener that the lobby will shed "light into the memorial pool." Notice how the way light falls in Freedom Tower's lobby mimics how light would fall in the World Trade Center's lobby. It's wild to think there's a lobby rendering - remember when Freedom Tower was just redesign upon redesign? 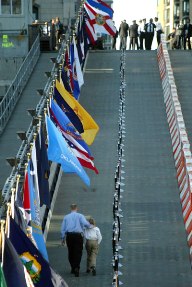 Of course, seeing what Freedom Tower's interior could look like seems premature when a group of September 11 victims' families is battling with Mayor Bloomberg and Governor Spitzer. The families want this year's September 11 ceremony to be held at Ground Zero and want to be able to descend into "The Pit," whereas government officials claim there's too much construction at the site, so the event must be moved to Zuccotti Park. The family members opposing the "downsizing" of the ceremony held a press conference to protest the move (they've actually filed for a permit to have their own ceremony at Ground Zero) and one family member said to the Post, "It's not as if the families can go to a cemetery. We certainly are not going to go to the Fresh Kills garbage dump to pay respect."

A "source close to the rebuilding effort" tells the Daily News, "We didn't see this coming. I don't think anyone on the City Hall side thought anyone would have any qualms about the fact that there's construction going on there." And NJ Governor Jon Corzine is getting in on the action: His office said he was waiting for "official reasoning from Gov. Spitzer and Mayor Bloomberg as to why the ceremony is being moved offsite."

In a final bit of Ground Zero news, the survivors' staircase may be moved to a barge off Governor's Island temporarily. Why a barge off Governor's Island? Well, it's somewhere not Ground Zero while the powers that be figure out what to do with it. The survivors' staircase is a love-it-or-hate-it deal: The National Trust for Historical Preservation named it an endangered place last year, but some have said it should just be scrapped. Community Board 1 member Bill Love said, "If the barge sank, it might make a nice natural reef." Ouch.