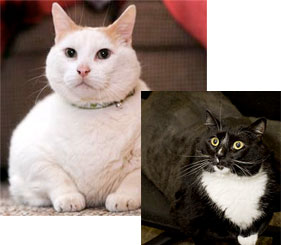 It's time to update everyone about Chunk, the full-figured feline who was embraced by the media this summer. While the cat was supposedly adopted, the Cherry Hill Courier-Post reports his new family is in a "contract squabble" with the Camden County Animal Shelter.

The shelter wants the Damiani family to sign a "special contract...[that] could require mandated public appearances by the feline. Any money generated by those appearances, or because of Chunk's fame, may go to the shelter." The shelter wants to make sure money aids animals in need.

However, the Damianis, whose adoption application had comments like "Great people!" and "Would be the perfect home!", are also concerned because they are referred to as Chunk's "foster family" in a recent letter from the shelter that says, "If, however, at any time you are unwilling to foster him ... [the shelter] prepared to find Prince Chunk another foster home should you need us to do so." The shelter's director, Jennifer Andersch, told the Courier-Post the adoption may be jeopardized by the family's decision to go public with these details. Poor Chunk!

Also intriguing: The Damianis say that when Chunk was taken to the vet, he only weighed 22 pounds, not his purported 44 pounds! Maybe that's why the shelter's new 35-pound addition, Shamu, seems to look fatter than Chunk.

#adoption
#Chunk
#fat cat
#prince chunk
#princess chunk
#Shamu
Do you know the scoop? Comment below or Send us a Tip