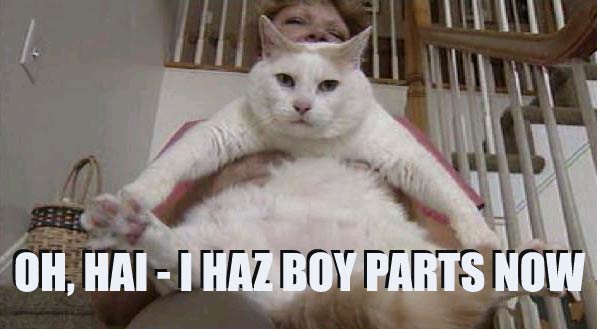 Princess Chunk's visit with Regis and Kelly was very enlightening: America learned that its favorite 44-pound obese feline was actually a boy! The Camden County Animal Shelter had originally named the cat, found wandering around Voorhees, NJ, "Captain Chunk," but gave it the royal, feminine name after thinking it was actually a girl. What happened to gender-neutral names, like "Whiskers"?!

It also turns out Princess Chunk did have an owner: An elderly woman who, per the Post, "was moving and couldn't care for him any longer because her house was being foreclosed." Which means Chunk can be adopted by a loving, qualified person who will probably have to help the cat with sticking to a diet and any other medications he may need.

Hundreds of people have inquired about taking Chunk in; one man told the Post he and his wife would love to adopt him, "I love animals and my wife is a real cat lover, we would take care of her and any medical bills if she is sick." He added he would walk her with their two dogs--"She's big enough for sure that she wouldn't be able to run that fast to get away." Well, if he can't get Chunk, there are plenty of other wonderful animals out there waiting to be adopted--check the Mayor's Alliance for NYC's Animals.