It's a moment 28 years in the making: Prince William, second in line to the British throne, is engaged to his college sweetheart Catherine "Kate" Middleton. An announcement was issued from Clarence House, the residence of Prince William's father, Prince Charles: "The Prince of Wales is delighted to announce the engagement of Prince William to Miss Catherine Middleton.The wedding will take place in the spring or summer of 2011, in London. Further details about the wedding day will be announced in due course."

The couple, both 28, met at St. Andrews University and have had an on-and-off relationship for the past eight years. Prince William proposed while they were traveling in Kenya last month. The NY Times notes:

Their engagement is a break from longtime royal tradition for a number of reasons. Unlike other future queens, Miss Middleton, who comes from Bucklebury, in Berkshire, is not of royal, or even aristocratic, lineage. Her father is a former airline pilot and her mother a former flight attendant; together they run a successful mail-order business that sells paraphernalia for children’s parties.

Also — in contrast to couples like Prince Charles and his first wife, the late Diana, Princess of Wales — they have been conducting their relationship openly for years. When Charles proposed to Lady Diana Spencer, the daughter of an earl who was deemed a suitable match for him, the two barely knew each other.

According to the Guardian

, "Kate Middleton will be the first commoner to marry an heir presumptive to the throne in more than 350 years, since Anne Hyde wed the Duke of York, later James II, in 1660." 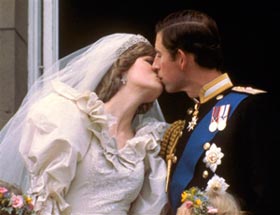 Princess Diana and Prince Charles in 1981

While British politicians have been offering congratulations, a group who wants to end the monarchy offered, "We mustn't see the government wasting limited resources paying for a major set-piece event … if people are being told to tighten their belts, if the government is making thousands unemployed, if welfare payments are being slashed, it would be sickening for the government to allow a single penny more to be spent on the royals at this time."

The marriage of Prince William's parents was watched by 750 million people worldwide (here's New York Magazine's cover story on it), and his romance with Middleton has been followed breathlessly by American publications and the Daily Beast's founder-newly announced editor-in-chief of Newsweek, Tina Brown, who wrote a biography of Princess Diana, has followed the royal family for decades and offered her thoughts on the engagement this morning on Good Morning America (apparently the wedding was called off earlier this year because of royal bungling!). Now, to compare Middleton to "Shy Di" and to wonder who will design her wedding gown!