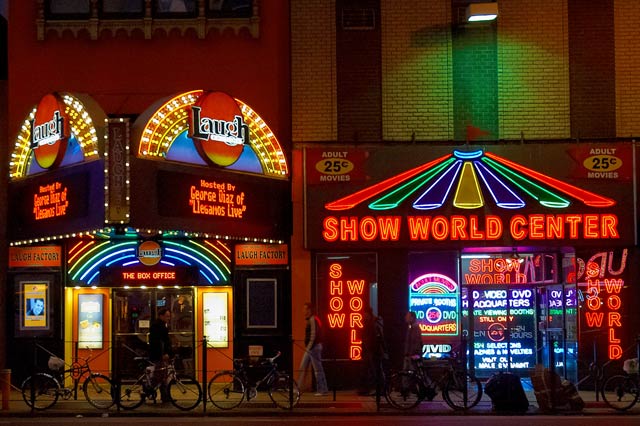 Show World owner Richard Basciano gives his first interview in 30 years to today’s NY Daily News, defending himself against allegations that he was shaking down his business partner, Laugh Factory co-owner Jamie Masada. Basciano calls Masada’s story “distortions and lies” and says that there were no "millions to hide" as Masada accuses because the club was not making a profit. He accuses Masada of poorly managing The Laugh Factory, undercharging on the menu and squashing a million dollar deal that they allegedly had in place with Comcast. Basciano claims that Masada wants him out of the picture so that he can open a another Laugh Factory with new partners.

Since The Laugh Factory moved into the Show World building, there are very few traces of the nudie booths and stripper poles that filled what was a cornerstone of the once X-Rated Times Square. Basciano has a history of mob ties but has not had a record in 40 years. Times Square Alliance President Tim Tompkins called him "honest” and “straightforward."

Basciano refers to Rudy Giuliani as “his nemesis” for the former mayor’s crackdown on sleaze in Times Square throughout the nineties, but he apparently has no desire to go back to the bad old days. "I could put girls in there and be within the law," Basciano said. "But I enjoy at this stage of my life...to be part-owner of a comedy club."

#jamie masada
#laugh factory
#Richard Basciano
#show world
Do you know the scoop? Comment below or Send us a Tip