Price Surge Uber Alles: Why Your Favorite E-Hail App Is A Cabbie's "Fantasy"

When it snows in New York City, everything goes to shit. The subways jam up, the roads get slick, and suddenly a 40-minute walk from Midtown to Greenwich village becomes a journey that tests both mind and body—unless you can afford to drop $250 on a ride. It wasn't the first time they'd done it, but Uber shocked the smartphone-clutching bourgeoisie this past weekend when they instituted "surge pricing" that charged fares eight times the normal rate. Logically, more cabs on the street is good for passengers. But when does surge pricing become price gouging?

Basically, there is no discernible difference.

"The best way to look at it is during Hurricane Sandy," says one financial expert. "You had these long lines because there was a limited amount of gas. But if you had surge pricing, gas could have been raised to $10 a gallon and there would have been less people on the line."

The expert, who works for a major news outlet and was not authorized to speak about Uber on the record, adds, "Is it fair? Not exactly, but it helps companies deal with demand."

"It's like a fantasy. You come to America with a dream, and the last four months have been a fantasy for me," UberX driver Ali explained to me on Wednesday night. The skies were clear, but there was still a 2.5X price surge in effect on my $30 ride from East 7th Street to Atlantic Terminal.

"Last weekend, I got an UberX call to go from Connecticut to New York City—by the end of the ride, it had cost the passenger over a thousand dollars."

Ali, who emigrated from Turkey 20 years ago, has worked in taxi service for most of his time in the U.S. Through UberX, he has started his own livery company out of Clifton, New Jersey, where he owns four cars.

Ali also said that several passengers got angry with the pricing over the weekend, but it wasn't his decision or his responsibility to collect money. All he needed to do was pick up the passenger and drive them to their destination. On a regular night, Ali says he can make more than $1,000 dollars. Compare that to a yellow cab driver, who's lucky to make more than $100 dollars in a shift.

Now, Ali explains, his son and daughter were driving UberX, helping put themselves through college.

Of the total fare, Uber takes around a 20% cut. That seems like a good deal to most UberX drivers, and enough to make UberX wildly profitable. Last month, Valleywag posted a peek into Uber's financials. Suffice to say, they're looking good.

"Surge pricing is a sign that there actually is a market," Reuters financial blogger Felix Salmon explains over e-mail. "If prices can't rise and fall, then that's prima facie evidence you don't really have a market in the first place. Markets are, by their nature, price-discovery mechanisms. Surge pricing is that, while set cab fares are not."

New York City created its strict taxi laws precisely to prevent this market free-for-all, when a few inches of snow can transform a cab ride into the last chopper out of Saigon.
A traditional taxi doesn't consider the highest bidder or largest fare, but whoever had their hand up. To ensure that this egalitarian scheme is profitable, taxi operators keep their numbers low, while the city has looked for ways around this impasse.

Mayor Bloomberg has threatened to "destroy" the taxi industry, though Uber would probably prefer the term "disrupt."

Thanks to the e-hail bill that was passed this summer, Uber can charge more for their service to meet the clear demand.

While Uber still uses yellow cab drivers who are beholden to the regulations stipulated by their TLC medallion (which means no crazy price surges), the company is rapidly expanding through its UberX program. Depending on who picks you up (it's clear when you agree on the App who you are going to get), you can have a normal fare, or a surge-pricing fare. In situations like this past weekend, it's mostly black cars responding to Uber calls. And for those drivers, like Ali, UberX has been a windfall. 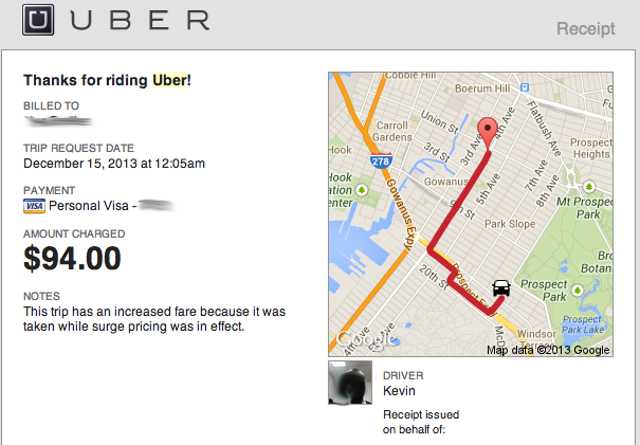 In a statement, Uber defended its practice:

"This is the busiest time of year for Uber. Surge pricing helps get more cars on the road quickly when demand outstrips supply, helping to guarantee the Uber reliability users count on. Users are clearly notified of - and must acknowledge - the elevated pricing within the app before they can request a car. As soon as demand falls or supply increases sufficiently, prices return to normal. In the end, Uber is always reliable and seeks to maximizes the number of people that can get safe and reliable rides; without surge, consumers simply wouldn't have that choice."

Still, the idea that a trip from Midtown to Lower Manhattan could cost almost $250 is unfathomable to most New Yorkers, even more so if they've been taking advantage of Uber's recent largesse with fares—the discounts and free rides the company has used to ingratiate themselves with New Yorkers over the past year. We pay premiums for almost everything in the city from housing to alcohol, the argument goes, so why should a short car ride be any different?

Because of its long battle with the TLC, Uber will most likely see its most serious expansion through UberX, which sidesteps the use of taxi drivers who work for other companies. UberX will help transform what was once an App for hailing a cab instead of finding one on the street into an efficient premium car service that will sometimes offer good fares, and other times totally scam you. On Wednesday night, the sure pricing fluctuated between 1.25X and 2.75X in a matter of minutes.

Ali explained to me how several friends of his are leaving yellow cabs and livery companies to do UberX full-time. 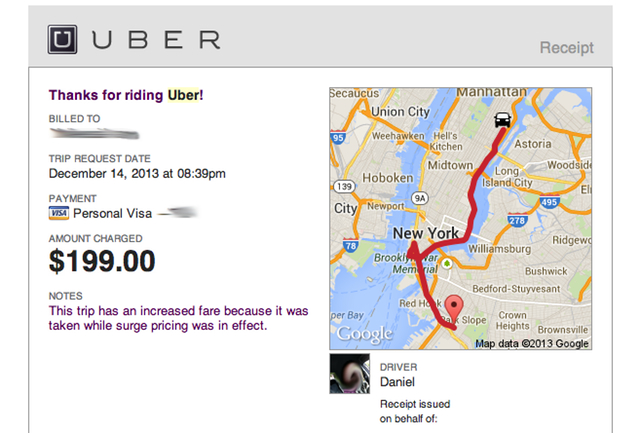 With such a good deal in place for drivers working for UberX, and the resulting drain on livery cab drivers, how will the city make sure that all areas of the city (and not just the ones populated by people with disposable income) are served by taxis when people need them most?

An answer to this might already be flowing through the streets of the outerboros, in the form of the now-ubiquitous green “boro taxis.” Part of an effort to make street-hails legal for livery cab companies (the black cars), within three years, 18,000 new taxis will be able to offer a metered fare to outer-borough residents. It won’t necessarily meet demand, but it’s a smart way to better serve places where Uber will not go.

To some, that signals that Uber is a product specifically geared towards the city's wealthiest residents.

"Uber is a luxury product, while UberX is definitely aimed at the regular cab-hailer or livery-car orderer," Felix Salmon says.

Luxury product, or miracle drug for the rich? Speaking to Bloomberg News, Uber investor Venky Ganeson said, "There have been so many times I've walked in New York or San Francisco and there have been no cabs. Thank god there's now an app that can get you a cab, just like you're thankful for the drug that saves your life."