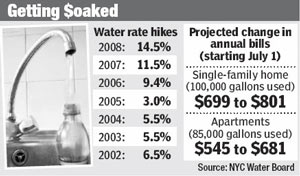 Add water to a list of things that are becoming less affordable to New York City residents, after the municipal Water Board approved a 14.5% rate hike on the heels of an 11.5% hike just a year ago. Perhaps the $5 glass of tap water that some restaurants are now serving is more reasonable than initially suspected. The new water rates, which take effect July 1, are expected to cost single family homeowners an extra $100 a year and apartment residents almost an additional $150 a year.

The vote to raise the price of water was a unanimous 6-0 in favor, with one Water Board member absent. Still, the Post described the total agreement as "reluctant." City Councilman James Gennaro accused the board of being completely under the thumb of Mayor Bloomberg. "The Water Board, the entity that's supposed to be separate from the Bloomberg administration, is completely controlled by the Bloomberg administration and what the mayor wants, the mayor gets."

The Water Board also started placing liens on properties this year that belong to deadbeat customers, sometimes with thousands of dollars in unpaid utility bills. It plans on selling those liens to debt collectors in order to help fill a $41 million budget gap for the last fiscal year.

#bloomberg
#hike
#rate
#tap
#water board
Do you know the scoop? Comment below or Send us a Tip
A new Gothamist is coming! We’ve moved comments over to our beta site. Click here to join the conversation and get a preview of our new website.