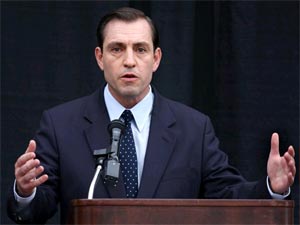 Even though Representative Vito Fossella is apologetic and looking for forgiveness, there are still questions about the woman who picked Fossella up from the Alexandria, VA jail.

Laura Fay is described as a 45-year-old retired Air Force colonel, who is a single mother with a young daughter. Susan Del Percio, Fossella's newly hired consultant to deal with his DWI crisis, told Staten Island Advance the congressman and Fay became friends when she was a House military liaison. And a source told the Daily News, "He doesn't want to bring anybody else into a matter that was his error."

Well, if you're wondering why Fossella would choose to call a friend who would undoubtedly come under scrutiny (whether single or married) versus calling an aide, let's point out that Fossella had a blood alcohol of 0.17--twice the legal limit--so his judgment was probably impaired. But the Advance also wondered:

When asked why Fossella would call Ms. Fay given the fact that the congressman's chief of staff, Thomas Quaadman, lives in Alexandria, Ms. Del Percio said, "He chose to call a good friend. Someone he has known for a long time."

Fay hasn't responded to media requests (the News reports, "A blond woman leaving the garage at Fay's home in runner's gear declined to identify herself or answer questions."). However, a neighbor was willing to say Fay was a stay-at-home mom until recently, but she didn't know anything about the toddler's father.

Oh, and also, Fossella's spokesman claimed he hadn't seen the arrest report so he couldn't explain why Fossella's claim to the Alexandria police that he (drunkenly) ran a red light because he was picking up his sick 4-year-old daughter was different from his press conference excuse of seeing some friends.

#Alexandria
#arrest
#Congress
#d.c.
#drunk driving
#politics
#staten island
#Vito Fossella
Do you know the scoop? Comment below or Send us a Tip