President Obama Warns Rutgers Grads Of Election Idiocracy: "Ignorance Is Not A Virtue" 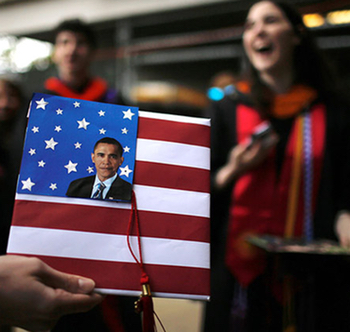 We traditionally have valued those things. But if you were listening to today’s political debate, you might wonder where this strain of anti-intellectualism came from. So, Class of 2016, let me be as clear as I can be. In politics and in life, ignorance is not a virtue. It's not cool to not know what you're talking about. That's not keeping it real, or telling it like it is. That's not challenging political correctness. That's just not knowing what you're talking about. And yet, we've become confused about this.

While Obama never explicitly named Trump, his speech was called "a tough, aggressive takedown of the Republican presidential front-runner" and "the beginning of a forceful effort to help elect a Democratic successor as president" by the Times and the Washington Post.

The president took on Trump's desire to build a wall and to ban Muslims:

The world is more interconnected than ever before, and it’s becoming more connected every day. Building walls won’t change that... It won't boost our economy, and it won’t enhance our security either. Isolating or disparaging Muslims, suggesting that they should be treated differently when it comes to entering this country that is not just a betrayal of our values that's not just a betrayal of who we are, it would alienate the very communities at home and abroad who are our most important partners in the fight against violent extremism. Suggesting that we can build an endless wall along our borders, and blame our challenges on immigrants—that doesn’t just run counter to our history as the world’s melting pot; it contradicts the evidence that our growth and our innovation and our dynamism has always been spurred by our ability to attract strivers from every corner of the globe. That's how we became America. Why would we want to stop it now?

Obama also lamented how "actual experts" are being called "elitists" by politicians; from the transcript:

The debate around climate change is a perfect example of this. Now, I recognize it doesn’t feel like the planet is warmer right now. (Laughter.) I understand. There was hail when I landed in Newark. (Laughter.) (The wind starts blowing hard.) (Laughter.) But think about the climate change issue. Every day, there are officials in high office with responsibilities who mock the overwhelming consensus of the world's scientists that human activities and the release of carbon dioxide and methane and other substances are altering our climate in profound and dangerous ways.

A while back, you may have seen a United States senator trotted out a snowball during a floor speech in the middle of winter as “proof” that the world was not warming. (Laughter.) I mean, listen, climate change is not something subject to political spin. There is evidence. There are facts. We can see it happening right now. (Applause.) If we don’t act, if we don't follow through on the progress we made in Paris, the progress we've been making here at home, your generation will feel the brunt of this catastrophe.

Look, I'm not suggesting that cold analysis and hard data are ultimately more important in life than passion, or faith, or love, or loyalty. I am suggesting that those highest expressions of our humanity can only flourish when our economy functions well, and proposed budgets add up, and our environment is protected. And to accomplish those things, to make collective decisions on behalf of a common good, we have to use our heads. We have to agree that facts and evidence matter. And we got to hold our leaders and ourselves accountable to know what the heck they’re talking about.

The president's commencement speech at the NJ school took about two years of lobbying and planning, and his presence bumped Bill Moyers from the headlining speech spot (Moyers spoke at the Arts & Sciences commencement instead). While he was bold about the way he wanted graduates to go forth, Obama was cowardly when it came down to a very important issue: Whether NJ should be using the term "Taylor ham" or "pork roll."

Here's the president's full speech, plus a transcript from the White House: