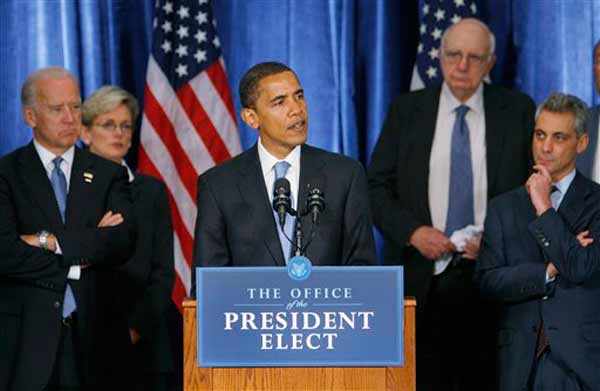 President-elect Obama speaks to the press and American public for the first time. He's discussing the economic situation and said, "We are facing the greatest economic challenge of our lifetime." Obama emphasizes that there's still another president in office, but once he gets to the White House, he and his team will act swiftly: "First, we need a rescue plan for the middle class that invests in immediate efforts to create jobs and provides relief to families that are watching their paychecks shrink and their life savings disappear. A particularly urgent priority is a further extension of unemployment insurance benefits for workers who cannot find work in the increasingly weak economy. A fiscal stimulus plan that will jump-start economic growth is long overdue - and we should get it done." Here's video:

UPDATE: After being very serious about the economy, he's opened it up to questions. First question was about how much he can do in his first 100 days, next was about Mahmoud Ahmadinejad's congratulatory letter (first thing, Iran starting a nuclear weapons program is bad; second, he hasn't responded)... and then he got the question about what kind of dog that his family is getting. He smiles and says that it's the issue most people are most interested in. Obama pointed out that there are two issues-- 1) daughter Malia is allergic, so they need a hypoallergenic dog and 2) they prefer to get a shelter dog ("a mutt like me") but a shelter dog may not be hypoallergenic.

NBC Political Director Chuck Todd noted that the Obama seal was back and that Obama was very careful not to endorse anything the Bush administration is doing, economic policy-wise, right now.

This morning, we woke to more sobering news about the state of our economy. The 240,000 jobs lost in October marks the 10th consecutive month that our economy has shed jobs. In total, we've lost nearly 1.2 million jobs this year, and more than 10 million Americans are now unemployed. Tens of millions of families are struggling to figure out how to pay the bills and stay in their homes. Their stories are an urgent reminder that we are facing the greatest economic challenge of our lifetime, and we must act swiftly to resolve them.

The United States has only one government and one President, and until January 20th of next year, that government is the current Administration. I have spoken to President Bush, and I appreciate his commitment to ensuring that his economic policy team keeps us fully informed as developments unfold.

Immediately after I become President, I will confront this economic crisis head-on by taking all necessary steps to ease the credit crisis, help hardworking families, and restore growth and prosperity.

My transition team will be working on each of these priorities in the weeks ahead, and I intend to reconvene this Advisory Board to discuss the best ideas for responding to these immediate problems.

Let me close by saying that I do not underestimate the enormity of the task that lies ahead. We have taken some major actions to date, and we will need further actions during this transition and subsequent months. Some of those choices will be difficult, but America is a strong and resilient country. I know that we will succeed if we put aside partisanship and work together as one nation. And that is what I intend to do.

This morning, I met with members of my Transition Economic Advisory Board, who will help guide the work of my transition team in developing a strong set of policies to respond to this crisis. We discussed several of the most immediate challenges facing our economy and key priorities on which to focus on in the days and weeks ahead:

First, we need a rescue plan for the middle class that invests in immediate efforts to create jobs and provides relief to families that are watching their paychecks shrink and their life savings disappear. A particularly urgent priority is a further extension of unemployment insurance benefits for workers who cannot find work in the increasingly weak economy. A fiscal stimulus plan that will jump-start economic growth is long overdue - and we should get it done.

Second, we must address the spreading impact of the financial crisis on other sectors of our economy: small businesses that are struggling to meet their payrolls and finance their holiday inventories; and state and municipal governments facing devastating budget cuts and tax increases. We must also remember that the financial crisis is increasingly global and requires a global response.

The news coming out of the auto industry this week reminds us of the hardship it faces - hardship that goes far beyond individual auto companies to the countless suppliers, small businesses and communities throughout our nation who depend on a vibrant American auto industry. The auto industry is the backbone of American manufacturing and a critical part of our attempt to reduce our dependence on foreign oil. I would like to see the Administration do everything they can to accelerate the retooling assistance that Congress has already enacted. In addition, I have made it a high priority for my transition team to work on additional policy options to help the auto industry adjust, weather the financial crisis, and succeed in producing fuel-efficient cars here in the United States. I have asked my team to explore what we can do under current law and whether additional legislation will be needed for this purpose.

Third, we will review the implementation of this Administration's financial program to ensure that our government's efforts are achieving their central goal of stabilizing financial markets while protecting taxpayers, helping homeowners and not unduly rewarding the management of financial firms that are receiving government assistance. It is critical that the Treasury work closely with the FDIC, HUD and other government agencies to use the substantial authority they already have to help families avoid foreclosure and stay in their homes.

Finally, as we monitor and address these immediate economic challenges, we will be moving forward in laying out a set of policies that will grow our middle-class and strengthen our economy in the long-term. We cannot afford to wait on moving forward on the key priorities that I identified during the campaign, including clean energy, health care, education and tax relief for middle class families.