President Bush Gives His Last State of the Union 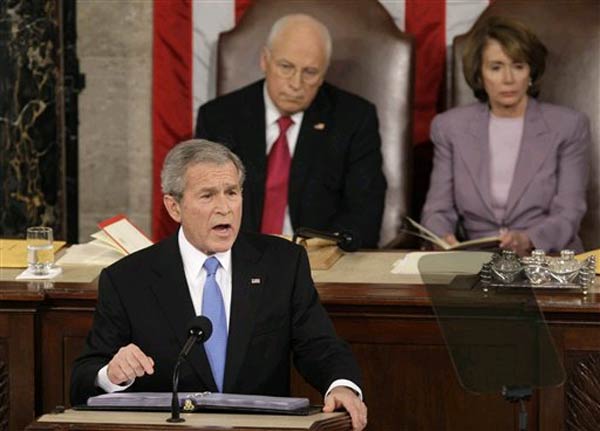 Photograph of President Bush, with Vice President Dick Cheney and Speaker of the House Nancy Pelosi in the background, delivering the State of the Union by Ron Edmonds/AP

President George Bush gave his final State of the Union address, sounding positive about his leadership but also noting that there's still more to do: "From expanding opportunity to protecting our country, we have made good progress. Yet we have unfinished business before us, and the American people expect us to get it done." (You can read the entire text here.)

The speech focused on war and taxes; Bush also tried to reassure the American public about the economy - "At kitchen tables across our country, there is concern about our economic future. In the long run, Americans can be confident about our economic growth. But in the short run, we can all see that growth is slowing" - and asked that the stimulus plan be passed quickly. 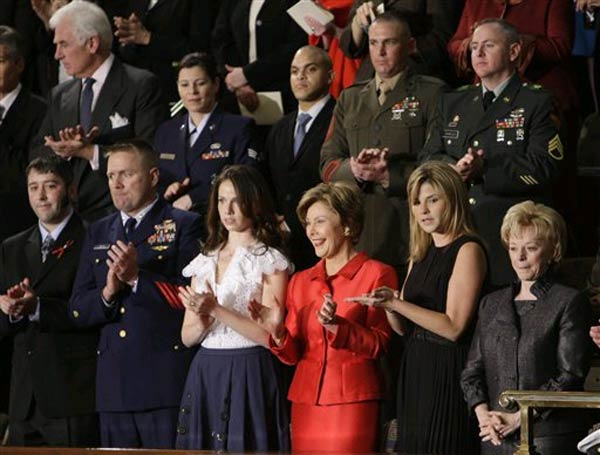 Photograph of First Lady Laura Bush, surrounded by daughters Barbara and Jenna Bush as well as Lynne Cheney and guests by Ron Edmonds/AP

Much of the post-address analysis hasn't been very impressed with the President, finding the speech a laundry list of "familiar ideas". The Democratic response, given by Kansas Governor Kathleen Sebelius, asked the President and Washington, D.C., to work with Americans to "be the America we have been - and can be once again" by making enough decisions and changes in the next 357 days about issues like the economy, war, and the State Children's Health Insurance Program (which Bush has vetoed twice (full text here). 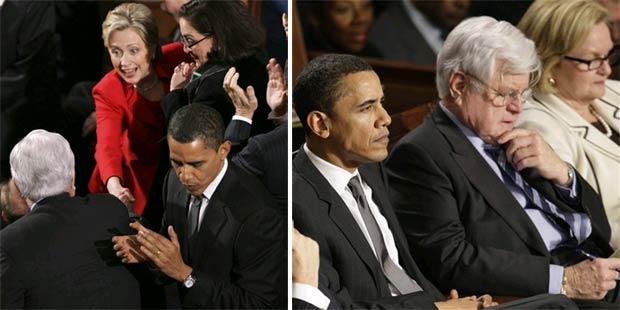 Left photograph of Hillary Clinton greeting Edward Kennedy as Barack Obama turns away by Scott Applewhite/AP; right photograph of Obama and Kennedy listening to the State of the Union by Ron Edmonds/AP

The evening's excitement was generated when Barack Obama entered the chambers with Senator Edward Kennedy. Kennedy, who joined his niece Caroline in endorsing the senator from Illinois today, sat next to Obama during the State of the Union. The two Kennedys explained to Time magazine why they endorsed Obama (Obama also weighs in on what the endorsements meant); Caroline Kennedy explained her decision to make her splashy endorsement in the NY Times, "I really felt like it was a crucial moment and if I had something that I believed in, then I really owed it to myself to express that. I recently turned 50, so I figured, I'd better get going — what am I waiting for?"