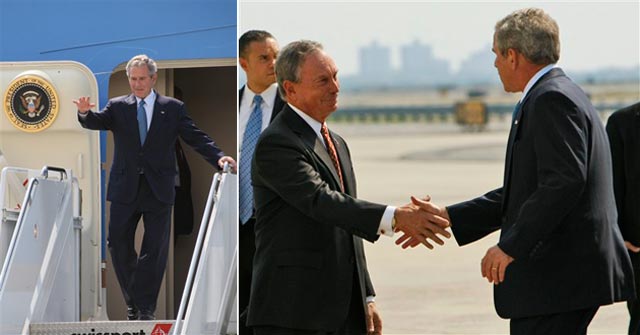 The Decider in Chief arrived at JFK Airport yesterday: President Bush was welcomed by Mayor Bloomberg and other dignitaries at the start of a trip that will mark his final visit to the United Nations General Assembly as U.S. leader and his first visit to NYC since last week's financial market meltdown. According to NY1, Bush and Bloomberg "spoke about the turmoil on Wall Street, and the president thanked Bloomberg for his ideas on how to curb the current meltdown of the financial markets."

The president's speech at the U.N. is expected to explain the U.S.'s huge $700 billion bailout of financial institutions. White House press secretary Dana Perino said, "He would not have wanted to take this action to help these companies if he wasn't convinced by the considered judgment of his senior economic team that it was critical in order to protect the American taxpayers and the American economy as a whole." His only officials meetings are with U.N. Secretary General Ban Ki-Moon and Pakistani President Asif Ali Zardari. 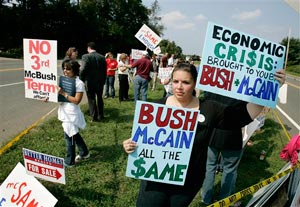 Last night, President Bush attended a private fundraiser in NJ to raise money for Republican congressional candidates. Some protesters lined the highway, and a NJ man who lost his job told the AP, "After 17 years, I'm out of work because (Merrill Lynch) lost $40 billion on subprime mortgages. Bush and McCain orchestrated this disaster and made it fall like a house of cards. Now you, me and everyone else is paying for it out of our own pockets."

#bailout
#economy
#general assembly
#mayor bloomberg
#nyc
#president bush
#united nations
Do you know the scoop? Comment below or Send us a Tip
A new Gothamist is coming! We’ve moved comments over to our beta site. Click here to join the conversation and get a preview of our new website.