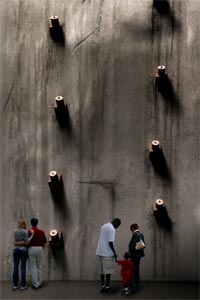 The NY Times highlights how, in spite of being many years away from opening, the National September 11 Memorial and Museum does have one exhibit in place: The 62 foot by 64 foot foundation wall, aka the slurry wall, from the original World Trade Center. However, the big challenge now is securing it.

The Port Authority and the memorial's builders are reinforcing it with "steel caisson cores," a "new concrete liner," and a "pilaster wall," an effort that will cost $11 million. The idea to showcase the wall started with World Trade Center master planner Daniel Liebeskind's 2002 proposal.

The Times spoke to the memorial and museum's president Joseph Daniels, who said visitors to the museum may be able to touch the wall, "We think the slurry wall could take on the resonance of the Wailing Wall. The idea of being able to get that connection, which will link you to the past, is important.”

And eight NYPD cops who died from September 11 attacks-related illnesses will be memorialized at police headquarters. The Post reports the police officers' names will be put on a memorial at One Police Plaza, with a ceremony on May 7. Those honored include police officers James Godbe, Thomas Brophy, Ronald Weintraub and Angelo Peluso and Detectives James Zadroga, John Young, Kevin Hawkins and Robert Williamson.

Zadroga's father, who waged a very public fight with the city over the classification of his son's death, said, "We are happy about it, but it's been a long battle."

#ground zero
#national september 11 memorial and museum
#nypd
#one police plaza
#slurry wall
#world trade center
Do you know the scoop? Comment below or Send us a Tip