The city’s plan to implement a new 14th Street busway in Manhattan this week may have been thwarted by a legal challenge, but the notoriously congested corridor is facing another obstacle: work on an office development between Third and Fourth Avenue that was supposed to have a limited construction footprint but which has instead pushed pedestrians off the sidewalk, blocking two road lanes, including a bus stop.

Andrew Berman, the executive director of the Greenwich Village Society for Historic Preservation, pointed out the traffic incursion in a letter last week to Mayor Bill de Blasio and City Council member Carlina Rivera. For more than a year, Berman has vigorously protested the development — a 21-story, 240,000-square-foot “tech hub” that is being developed jointly by RAL Companies and the city, which owns the land — for further commercializing the neighborhood below Union Square.

“There were explicit promises that were made,” Berman told Gothamist. One being that "there would be no impingement of the sidewalk.”

Demolition permits for the site, which was formerly home to a P.C. Richard & Son, were issued in May, according to the Department of Buildings. Berman said that not long after, construction sheds at the project closed off the entire sidewalk space in front of the site, forcing pedestrians to walk on a stretch of the street that is blocked with safety barricades. Road markings, presumably to provide an additional buffer for pedestrians, have taken up additional territory.

This was not what elected officials were told would happen on what is a critical transit corridor that was set to undergo a redesigned traffic plan. During a public hearing before the City Council last year, Spencer Levine, a senior project manager with RAL Companies, assured council members that construction on the site would not impede pedestrian traffic in anticipation of the busway plan, which calls for Select Bus Service and restricted private car access. At the time, the concerns were expressed around the intended L train shutdown, which has since evolved into a partial shutdown on nights and weekends.

Prior to a judge halting the city's transportation plan, the 14th Street busway was to have taken effect on Monday.

During the hearing, Levine specifically said the developer would not be seeking a lane closure. Drawings of the demolition plan submitted as part of the developer's application showed only scaffolding installed above the sidewalk.

However, the bus stop in front of the development site is currently closed off, resulting in buses having to drop-off and pick-up passengers along a single lane of eastbound traffic. 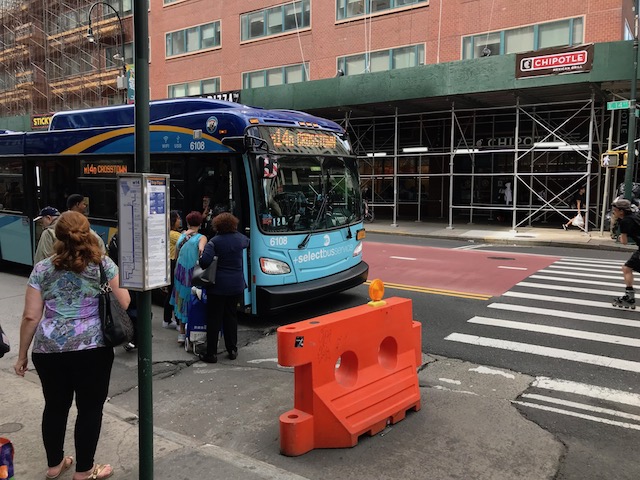 Bus stop in front of tech hub site between Third and Fourth Avenues on 14th Street. (Photo courtesy of GVSHP)

Asked about the construction's impact on the busy thoroughfare, a spokesperson for RAL Companies issued the following statement:

“All pedestrian rerouting, sidewalk closure, sequencing and logistics is coordinated with Department of Transportation, Department of Buildings, and NYC Transit Authority to ensure safe passage by pedestrians and vehicles at all times. RAL is committed to minimizing and mitigating any impacts to the public, and will seek to realign and further refine pedestrian access when it is safe to do so.”

The DOT did not immediately respond to a email from Gothamist about the project, but Jane Meyer, a spokeswoman for Mayor de Blasio issued a statement saying, "Pedestrian traffic is still flowing at the site. A pedestrian walkway is provided in front of the site, as is the case at many construction sites around the City. DOT approved these plans based on current conditions on 14th Street."

She added that the developer's commitment "was made at a time that the full L train shutdown was contemplated."

In his letter, Berman raised other unmet pledges made during the tech hub's approval, namely that the city would work to curtail hotel development, another community concern that the area is moving away from residential to commercial uses. But to date, no zoning proposal has been introduced.

Meyer said the administration was "actively working to address the concerns respect to future development as well as preservation of existing housing in the Union Square South area."

She continued: "As such, we are examining what provisions a new hotel special permit might have in order to support an appropriate balance of uses to serve this community and the City."

Jeremy Unger, Rivera's spokesman, also issued a statement in response to Berman's letter. He said that the council member had worked on a variety of measures related to preservation and tenant protections, including "Know Your Rights" Tenant Resource Fairs that are scheduled to begin in City Council District 2 this month.

Regarding the construction, he said: "Our office will work hand-in-hand with the project’s community advisory board to ensure that staging and safety measures are following MTA, DOT, and DOB protocols in light of the most current 14th Street transit projects."

Meanwhile, frustrated transit advocates gathered on 14th Street on Monday to protest the lawsuit. Last week, a judge sided with local homeowners to block the implementation of a dedicated busway on 14th street. Neighbors who launched the suit claimed that the busway plan would divert traffic onto residential side streets. The MTA nonetheless launched Select Bus Service on Monday, minus one essential feature. An MTA representative confirmed that 14th Street is the only SBS route in the city without a dedicated bus lane.

City officials estimated the proposed vehicle restrictions to 14th Street would increase bus speeds on the notoriously slow M14A/D buses by as much as 30 percent.

“I got off the L train and decided to walk, because I knew it would be faster,” said Thomas DeVito, the director of advocacy at Transportation Alternatives who was protesting the lawsuit. “The entire time I was walking here from Union Square, I was in front of a bus. This is the kind of service 27,000 New Yorkers are having to deal with everyday.”

#14th Street busway
#GVSHP
#tech hub
#traffic
Do you know the scoop? Comment below or Send us a Tip