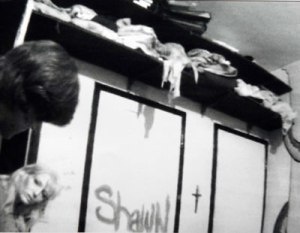 Were the police surveillance photographs of Shawn Kovell's apartment what set her landlord off? Or was it the fact that she and boyfriend Robert Chambers had been arrested by undercover cops for allegedly selling drugs out of the East 57th Street apartment? Apparently it was something more simple. The couple wasn't able to make the rent.

Chambers, infamous to New Yorkers as the Preppy Killer after he admitted to the 1986 strangling Jennifer Levin in Central Park back, and Kovell moved to the rent-stabilized apartment. They had been living in Georgia after Chambers' 2003 release, but the lure of the relatively inexpensive apartment for $1,100/month (Kovell inherited the lease when her mother died) proved to be irresistible. The NY Times reports that the rent is now $1,800. The couple face charges of selling drugs in the apartment.

Kovell's lawyer Franklin Rothman had argued that her $25,000 bail and jailing was unfair and due to her association with Chambers - and that in any other case, Kovell would get help for her drug addiction. He told the Daily News that his client's landlord served the couple with eviction papers because he wouldn't accept partial payment for the rent: "He said cops found six $1,000 money orders Chambers' mom gave him for the rent." Which suggests the couple struggled to come up with the remaining money needed - maybe that's why Chambers allegedly suggested to undercover cops that they steal a car and split the money.

The Times has a profile of Kovell, noting how she was known to doormen at all the clubs when she was 17 and how friends believe her relationship with Chambers led her from recreational drug abuse to serious addiction, but he seemed stable after being raised by an alcoholic mother: "I really got the impression that she felt loved by Rob when she met him and, however ironically, she feels safe with him.”