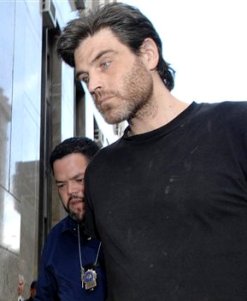 Facing numerous drug charges that could put him away for the rest of his life, convicted murderer Robert Chambers pleaded not guilty during a Thursday court appearance. Chambers, 41, and his companion, 39-year-old Shawn Kovell, are accused of selling drugs from Kovell's rent-stabilized one-bedroom apartment on East 57th Street in Manhattan. Earlier this week, the couple were busted by undercover officers.

The Manhattan DA's office, no stranger to Chambers after the infamous 1986 murder of Jennifer Levin (he pleaded guilty in 1988 and served 15 years) as well as other drug-related run-ins with the law, said they had a "very, very strong case" against the couple. Newsday reports that Chambers' court-appointed lawyer asked the judge for money to "hire an investigator to evaluate the evidence, including the police videotapes," and added, "I also need copies of the videotapes and stills, to which Judge Charles Solomon said, "Let's cross that bridge when we get there."

Chambers also allegedly offered the undercover cops an unsuspecting person's bank routing number, offering to split the cash, and asked them to steal a BMW, which they could sell and then split the proceeds. A police source told the Daily News, "He kept pushing and pushing and pushing to get the undercover to agree. He needed the money - fast." The prosecutor Daniel Bayles referred to these activities, "We are looking into whether there will be additional charges."

As for Kovell, who is facing one drug charge, her lawyer Franklin Rothman tried to make the point that her relationship with Chambers was drawing unfairly harsh punishment, "She has no prior contact with the criminal court system. She was born and raised in the 57th Street apartment. Worked as a bartender. Under normal circumstances she would be released or have bail at $5,000 with medical treatment." Kovell has known Chambers for a long time and appeared in the 1987 video of Chambers (then under indictment for Levin's murder) where he popped off a doll's head and said, "Oops! I think I killed it." Rothman added, "She waited for him when he was in prison... Whether it's love, whether it's co-dependency...Call it what you will."

Their bail will be discussed Monday.

Photograph of Chambers by Louis Lanzano/AP