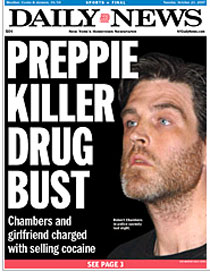 You'd think that if you were one of the city's most notorious murderers, you'd try to keep a low profile. But apparently Robert Chambers, the infamous Preppy Killer, thinks a low profile means selling drugs from an East 57th Street Manhattan apartment.

Chambers and girlfriend Shawn Kovell were arrested and charged with felony sale of narcotics after the police busted Kovell's one-bedroom apartment. Undercover police officers had purchased a quarter kilo of coke (worth $20,000) from Chambers over eight sales. Chambers also resisted arrest, injuring two of the cops' hands (one has a broken thumb).

The police said neighbors complained about the foot traffic to the couple's apartment, saying they were "pretty indiscreet about it." And in fact, apparently when neighbors saw the police, the Daily News reports that one said, "I hope you're here for the 17th floor." A building employee referred to Chambers and Kovell as "vampires" - "They only come out at night."

Chambers pleaded guilty to manslaughter in the 1986 death of Jennifer Levin. Chambers, then 21, met the 18-year-old Levin at Upper East Side bar Dorrian's Red Hand and later strangled her in Central Park. Chambers claimed the strangulation was the result of "rough sex" and accidental. [More about the murder case here at Crime Library.] Former ADA Linda Fairstein told the Daily News that his latest batch of problems "doesn't surprise me. I always believed his problem with drugs and alcohol would get him in trouble again. He's had the opportunity in prison to detox and take college courses, to straighten out his life, but that clearly is of no interest to him. He's learned nothing in the last 20 years."

Kovell goes way back with Chambers: She is one of the women in the 1987 videotape where Chambers pops the head off a doll and says, "Oops! I think I killed it!"