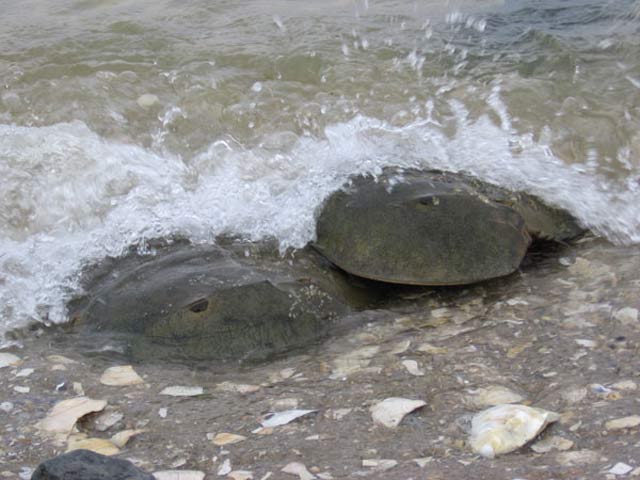 It's that time of year when love at the seashore blossoms, and hordes of initially alarming-looking horseshoe crabs scuttle up onto the beaches of Jamaica Bay to procreate in the sands. The species is approximately 450 million years old, and they look like something from a dinosaur film strip. Despite their tails that look like barbs and alien appearance, horseshoe crabs are completely harmless.

Every summer, under a full moon, the crabs migrate to beaches where the female lays her eggs and multiple males make their play to inseminate them. Dr. Martin P. Schreibman, a marine biologist at Brooklyn College, is featured in a NY Times video discussing his work attempting to cultivate and preserve the species. His work usually takes him to Plum Beach, on Brooklyn's Jamaica Bay, where crabs romance each other amidst the garbage and other detritus that litter New York's beaches. Citynoise has a series of photos of mating horseshoe crabs taken a few years ago.