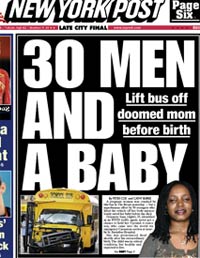 An awful tragedy unfolded in the Bronx yesterday afternoon: A 33-year-old traffic agent was crossing 188th Street at Webster Avenue when a "runaway van" hit her. Donnette Sanz was propelled into the path of a school bus, and she was pinned underneath. A witness told NY1, "The van had hit the lady first, she flipped over. And the bus had got in the way, and hit her and ran her over."

About thirty people rushed to the scene to lift the bus off the 7-months-pregnant woman. Emergency workers took her to St. Barnabas Hospital, where doctors were able to deliver her baby boy--3 pounds, 6 ounces--but could not save Sanz. Police arrested the van's driver, Walter Walker, 72, who was charged with criminally negligent homicide. Walker, who was also charged with driving without a license (he's been arrested for that twice before), remained at the scene and claimed his brakes failed.

Witnesses were aghast at the accident, but also came together to help Sanz. A stay-at-home mom spoke to the Daily News, "I ran out of my house to join 10 people trying to lift up the bus," while a construction worker told the Post, "Twenty of us started lifting up the bus - about 10 more came to help. We didn't really communicate, we all just started lifting. We lifted it up and someone pulled her out. It's amazing that all those people came out and helped. It's good to see people still care."

Mayor Bloomberg visited with the family and told reporters, "It is a terrible poignancy that Donnette’s son’s birthday will now coincide with the day his mother died," he said. "I hope that as this child grows up, he comes to understand that his mother gave her life in service to our city, and that we are forever grateful." Police Commissioner Ray Kelly added, “Traffic enforcement agents are among the most important and least appreciated public servants."

The baby, who is in neo-natal ICU, is named Sean Michael. Sanz's sister said, "She got the baby's [sonogram] picture on Sunday. She said all she's living for is her baby."