Penelope, a pregnant Mexican Red Rump tarantula, has escaped from her South Slope home. She is currently running wild in South Brooklyn and has presumably laid tiny killer tarantula eggs along the Prospect Expressway. This hasn't been confirmed, but we've all seen enough movies to know baby spiders like to swarm unsuspecting passersby and consume them whole, so consider yourself warned.

A redditor spotted this sign on a pole this week: 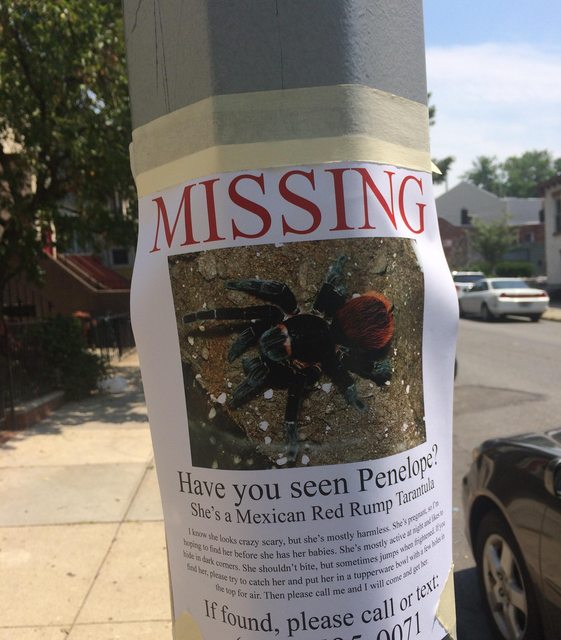 As you can see, Penelope is "mostly harmless." Though that "mostly" probably means she's been preparing to feast upon her unsuspecting owner for years now, testing the waters by nipping him gently from time to time with her tarantula teeth (do tarantulas have teeth?) to see how he responds to her tarantula venom (pretty sure they have venom) before going in for the final kill.

Penelope does belong to someone, however, and this person is very concerned about her and her unborn tarantula babies. If you see her, please put her in tupperware, punch some holes in the top, notify her owner as to the exact location of this tupperware, and then run away screaming.

Just in case you aren't sure what a Mexican Red Rump tarantula looks like, here's a video of one being fed a delicious snack.

#brooklyn
#park slope
#penelope
#south slope
#spider
#tarantula
Do you know the scoop? Comment below or Send us a Tip