The World Cup is nearly two weeks away, and there's a lot of soccer news!

NYCFC today unveiled their season ticket prices for the upcoming 2015 season. While season ticket deposits have been taken since the announcement they'd be playing in Yankee Stadium, this is the first time the full package price has been available.

Compared to other NYC sports options, the ticket prices are reasonable. Comparing like-for-like sections at Red Bull Arena, the prices are generally on the same level, if not cheaper. Non-club per game season ticket prices range from $18-52, with single match tickets ranging from $25-65. It's smart pricing to build the fan base for the new team.

If there's one complaint, it's that the Supporters Section, a standing only area for fans who want to chant for the whole match, spans sections 235 to 238. That puts a section (and the visitor's bullpen) between them and the field, which is an interesting design choice. 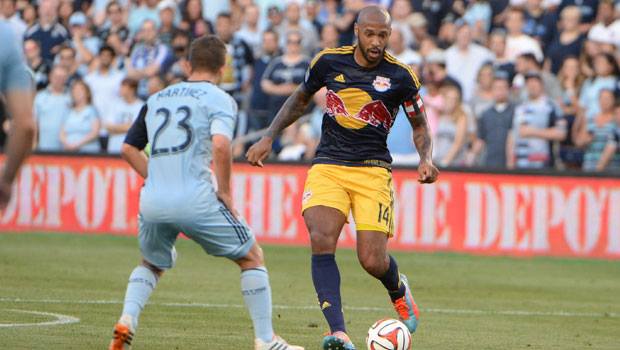 The New York Red Bulls spent Tuesday night on the road, playing to a tough 1-1 draw at Sporting Kansas City.

Coming off short rest having just played Saturday, it was a bit optimistic to hope they would come out strong. Instead, New York turned in a performance Mike Petke labeled "perhaps our worst start of the season". Goal line clearances and being saved by the crossbar could only hold off Sporting for so long, with Toni Dovale scoring in the ninth minute.

It looked like a long night ahead, but as Sporting eased off the gas, the Red Bulls came out strong in the second half. A beautiful through ball from Thierry Henry set up Bradley Wright-Phillips for his league leading 11th goal of the season. The draw ends New York's losing streak, converting it into a still-troubling-but-less-fatal four game winless streak.

The Red Bulls won't play again until June 7th at the East's hottest team, New England, where they haven't won in over a decade. They'll need to put in a complete performance for a change if they're going to find a result in their last match before the World Cup break.

Speaking of the World Cup, the US Men's National Team played the first of their three-game sendoff series in San Francisco, defeating Azerbaijan 2-0. Mix Diskerud and Aron Johansson both came off the bench to score both goals in the second half, in a performance that didn't do much to calm down concerns about the team's readiness for Brazil.

The USMNT roll into NYC next, and US Soccer has planned a number of events for fans who want to connect with the team before they head to Brazil. On Friday, members of the team will appear on Good Morning America. A "fan fest" will be held in Times Square from 1PM-5PM, and members of both the 2014 squad and legendary 1994 squad will take part in the Men In Blazers On Broadway show at Town Hall.

There will be a free public training session at Red Bull Arena on Saturday from 11-12:30, all leading up to the US taking on Turkey Sunday afternoon at 2PM. Limited tickets are still available; the game will also be televised on ESPN2.