Conrad Milster—Pratt's Chief Engineer for the last 57 years and the man behind the Institute's recently-retired New Year's Eve steam whistle salute—is among five current staff and faculty members and their families facing eviction from historic townhouses on the art school's Brooklyn campus.

Impacted tenants have until January 31, 2016 to "vacate," according to an eviction notice sent last month. Some of them have lived in the townhouses, on a tree-lined block abutting the campus's sculpture-dotted quad, for decades.

Milster, 79, who was born and raised in Astoria, has lived and worked on the Pratt campus since 1967, the year he and his late wife Phyllis got married. The couple lived in a campus townhouse on Emerson Place until Phyllis moved into a nursing home four years ago. Milster's home was converted to a dorm in 2012, and Milster was moved around the corner to a vacant campus townhouse on Willoughby.

"They blindsided us," Milster told us this afternoon, speaking of the eviction notice he received on September 11th. He says that the university told him he would have at least five years in his Willoughby townhouse—a verbal promise.

"As chief engineer, especially once the heating season starts, I'm a 24/7 person," he said. "So living on the campus is a great convenience. I can stop in the power plant to check and see how things are."

#PrattInstitute should consider the wellbeing of its most devoted faculty over monetary gain #ConradMilster #Pratt: https://t.co/yQL2YPGZ20

The same steam engines that Milster used in the '50s, with parts that date back to 1900, are still responsible for providing heat and hot water to the entire campus. Most of the replacement parts have long since gone out of production, so he fabricates his own from scratch.

"Now I'm going to have to do something else, which probably means leaving Brooklyn and Pratt," Milster said.

"It all lives with me and dies with me," he added, speaking of the maintenance of his complex steam-heating system. "I could have someone with me for ten years and I don't know if I could pass off everything I've learned in 50-odd years here at Pratt."

The five townhouses in question, four of which are on Willoughby Avenue near the corner of Emerson Place in Fort Greene, are scheduled to be gutted and renovated into student housing early next year. Undergraduates will eventually pay $4,804 per semester for a single furnished room and shared kitchen, living room, parlor, and back yard. Six students will live in each house, two to a floor.

One current faculty tenant described his rent as one-fourth of his monthly salary. Milster says he has had a contractual agreement with Pratt to live rent free for the past several decades.

The Pratt Townhouses Renovation Project has been underway since 2011, when the college invited architect and alumnus John Davies to renovate 27 of them, and convert them into student housing. 13 townhouses have been renovated to date, and the four targeted for January 2016 mark phase four of the seven-phase project.

An interview with Davies, published two years ago by Pratt, describes the townhouses as Colonial Revivals, built in the early 1900s to house workers at the nearby Astral Oil Works, a kerosene refinery factory founded by the school's founder and namesake, Charles Pratt.

Davies describes the townhouses as "abandoned," with no mention of the few that are currently occupied.

A copy of the September eviction letter, supplied by a current tenant, describes a "pressing demand" for "much needed" student housing.

Pratt's current enrollment is 4,556 students, 3,145 of whom are undergraduates. The school reportedly has plans to break ground on a new 17-story, 110-unit student residence tower, on a plot of land at nearby 131 Emerson Place. Pratt purchased the site in 2012, for $13 million.

"Our houses represent 30 beds," said Milster this afternoon, referring to the four households facing eviction. "[How is that] we've suddenly become a major stumbling block in institute recruiting?" 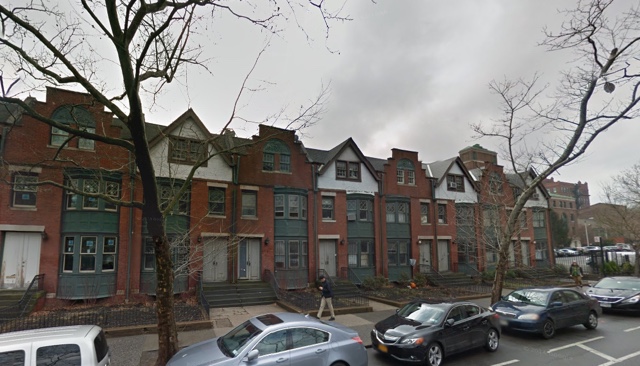 The townhouses in question, on Willoughby Avenue near Classon Place (Google Maps)

According to a tenant who has lived in one of the Willoughby townhouses for decades—who spoke anonymously for fear of endangering his faculty position—all 27 houses were rented by staff and faculty as recently as the 1990s.

As tenants "moved out, retired, or died," many of the row houses fell into disrepair. When renovations started happening in 2011, the abandoned townhouses were the first to be gutted. Meanwhile, current tenants hoped that they would be allowed to remain in their homes, and continue to pay rent.

Milster's neighbor, Thad Ziolkowski, is head of Pratt's writing program, and has been on staff since 1997. He's lived in one of the to-be-gutted townhouses since 2001, with his wife and two young children, ages 9 and 3. Living so close to campus, Ziolkowski has long invited students to his home, and hosted receptions and book parties.

A group of faculty (none of whom live in the townhouses) and recent alumni have started an online petition to stop the evictions.

"Many of these staff/faculty members have been calling these townhouses home for years," the petition reads. "This would not only ruin the historic identities of the houses, but also the lives of those living in them."

"I'm a person who loves stability," Milster says in a recent documentary-short about his Pratt career by filmmaker Dustin Cohen.

The documentary includes many interior shots of Milster's townhouse, where he keeps hundreds of engineering books discarded from the Pratt Library, as well as pressure gages and name plates, which adorn his floral-wallpapered kitchen.

Come January, he'd love to find a home that would fit his collections, as well as the numerous rescue cats that he's fed and housed, notoriously, for years.

"I don't know that I could afford the rents that are here in Brooklyn," he said. "I would probably go upstate. I have a hankering for this little one-family Victorian-ish house, with a porch I can screen in for the cats, a cellar for my workshop, and lots of storage space for my books."

"What you wish for and what you get," he added, "are two completely different things."

The Pratt administration did not immediately respond to request for comment on the evictions.

Since 2008, Pratt has been renovating its townhouses, which formerly served as faculty and staff housing, in multiple phases in order to meet the pressing demand for student housing. Institute leaders recently met with the five faculty and staff members currently residing in the townhouses to discuss a move-out date. It was agreed that follow up meetings will be held with each faculty and staff member separately to develop customized transition plans that will address their individual needs. Therefore, move-out dates for individual residents have not yet been determined although they will occur over the spring and summer of 2016.

#Conrad Milster
#eviction
#housing
#pratt institute
#original
Do you know the scoop? Comment below or Send us a Tip
A new Gothamist is coming! We’ve moved comments over to our beta site. Click here to join the conversation and get a preview of our new website.