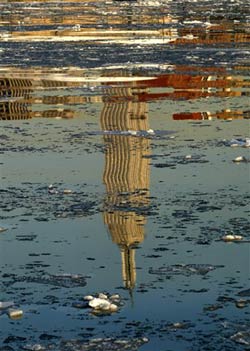 Two elevators inside the Empire State Building stopped working last night when construction workers accidentally cut power lines. Over five hundred tourists were stranded on the observation deck while more than a dozen were stuck in an elevator near the 80th floor for over an hour. Two women were injured when, witnesses said, they had to jump off the stuck lifts about a foot to the floor. Both were taken to the hospital.

The tourists inside the elevator described a frightening scene of tears and panic attacks. Cell phone service was dead inside. One German couple tried to keep everybody calm by passing out chocolates. "I had some chocolate and I give all to people, but it's not so good," Jutta Siegers said.

Once power was restored, building officials offered the stranded passengers a refund and invited them back on Saturday. That didn't sound like the warmest invitation to some of the group. "When we came down nobody there say sorry to us" Siegers said.

#empire state building
#germans
#power outage
#tourists
Do you know the scoop? Comment below or Send us a Tip