Ten days after a man was fatally killed by a Brooklyn luxury rental building's elevator, the Department of Buildings has announced that the make of the device has a "potential deficiency" and has ordered that all other buildings using the same kind of elevator system undergo testing.

At around 4 a.m. on Friday, October 2nd, Eran Modan and a group of friends (reportedly anywhere from 10 to 14 people) were in the elevator of the Espoir, a luxury rental at 156 Hope Street in Williamsburg. The elevator fell—with its doors open—to the basement and, after waiting, Modan stepped out—just as the elevator quickly ascended to the lobby. Modan died at the scene; apparently his head was caught between the lobby and elevator.

While residents have long experienced odd/stalled service from the elevators, the building's management company, Goose Property Management, claims Modan's death was not its fault. In an email sent to building tenants after the tragedy, Goose PM wrote:

We understand that some of our residents may feel tense and uneasy on how such an occurrence happened in a luxury building as The Espoir, however with all inspections and maintenance, Acts of God cannot be foreseen and intervened. The events of last evening are unfortunate and will always be remembered, however, acts that are beyond the control of management and ownership cannot be anticipated.

An elevator at another building in the Espoir complex, 140 Hope Street, was found to have failed the 125% capacity load test. While the elevator Modan was in may been been overloaded, elevator experts say that braking systems should be able to hold 125% of the stated load maximum. 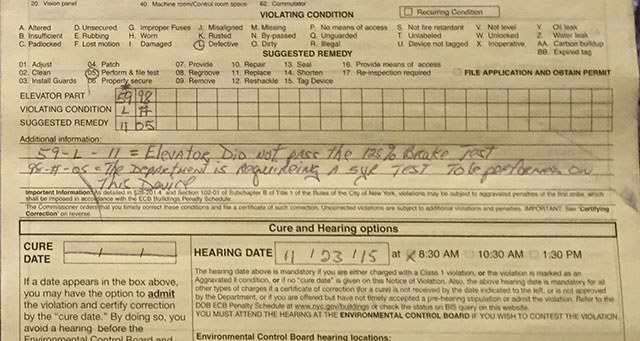 The DOB has been investigating, and today issued this statement:

On October 2nd a fatality occurred in conjunction with an elevator failure at a privately owned building at 156 Hope Street in Brooklyn. In the course of the Department's investigation into the incident, we determined that a specific make of elevator system (Global Tardif Machine Room-Less Elevator with Leroy Somer Z2-Z3 AC Gearless Machine and Warner Brakes) might have a potential deficiency. These units, generally found only in elevator systems installed since 2000, are not common in New York City, and represent only a very small fraction of total elevators in use. These devices are not used by NYCHA. To ensure this issue is addressed immediately, the Department has issued a Commissioner’s Order mandating that owners and operators of this equipment test it by a licensed firm and provide all results to the Department.

Staff at the Department are currently contacting owners and managers of any properties with these specific elevators to ensure compliance. Inspectors have already begun visiting buildings that may have this type of elevator in active use and will follow up where necessary. Under the Commissioner's Order, until these buildings can certify to the Department that there is no deficiency in their elevators, they are ordered to either have a person on staff operate the unit manually--which can be done safely--or cease use of the device. With these measures in place and all units inspected, we believe there will be no risk to the public. Anyone seeking more information or to report an elevator problem should contact 311.

A resident at 156 Hope Street said that building staff has been there to assist tenants with bringing packages and strollers up to apartments while the elevator is out.