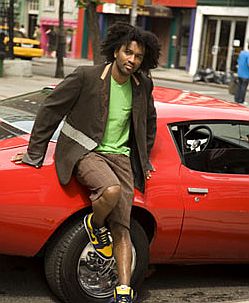 Cordell Lochin is a bit of an enigma. The well-connected scenester, subject of an indulgent profile in the Observer last spring, presented himself as a partner in the obnoxiously affected nightspots La Esquina and The Box. Now the other entitled owners are distancing themselves from Lochin and the enigma will soon be wrapped inside a prison cell; Guest of a Guest has news that Lochin’s gotten sent up on a 3-year bid for involvement in a cross-border marijuana smuggling ring.

Serge Becker, part-owner in La Esquina, has now been referring to Lochin as just an “indispensable advisor.” Was he stepping away from the fallout or trying to help Lochin’s legal strategy of downplaying his connection to the clubs in order to minimize his punitive damages? (He'll pay $35,000.) It’s a murky world down there behind the scenes of these exclusive dens of decadence. La Esquina, the semi-secretive subterranean bar and restaurant,
was the scene of an alleged beating meted out by a bouncer upon a curious, photo-snapping patron.

Last summer The Box – where the rich and famous gather to enjoy performances like 'toss a ring on rods stuck up the lady’s orifices' – and La Esquina were both raided in the same night; at The Box patrons were lined up and searched for drugs. Luckily, it was the ring toss girl’s night off.

Guest of a Guest speculates the heat that night was turned up by police interest in Lochin’s outlaw dealings; we wonder what role these dealings played in all those celebrity connections that the Observer just swooned over. (“Who’s in his BlackBerry? A glance revealed: Adrien Brody! Amy Sacco! Chelsea Clinton! Colin Farrell!”) And Lochin’s mother – a Trinidadian immigrant – surely wasn’t anticipating this turn of events when she told the Observer last spring, “He was always going to clubs. I never thought anything would come of it. Certainly not this.”