Pot Arrests On The Rise Under De Blasio's Watch

The NYPD has arrested more New Yorkers for low-level marijuana offenses in the past six months than they did over the same time period last year. Petty marijuana arrests were also higher in July and August of this year than they were during the Bloomberg administration, despite Brooklyn DA Ken Thompson's decision to stop prosecuting many petty marijuana arrests in July.

The numbers come from a report prepared by the Drug Policy Alliance, and show that the racial disparities of marijuana arrests continue under the new administration; 86% of New Yorkers who were arrested for marijuana possession in the first eight months of the year were black or Latino. And 74% of those arrested for possession have no prior convictions.

Washington Heights, East Harlem, and East New York had the highest rates of marijuana arrests, while Forest Hills, the Upper East Side, and Richmond Hill/Woodhaven had the lowest. 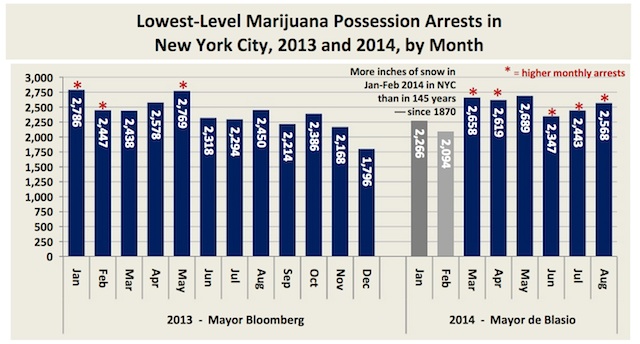 In an article on Broken Windows for the New York Review of Books, Michael Greenberg describes a boy he met in the Tombs last year who had been arrested for marijuana possession.

The boy had made the mistake of asking a rider who was exiting a subway station to swipe him through with her MetroCard. “I was thirty-three cents short for a single fare,” he told me. He neither jumped the turnstile nor harassed the woman, who obligingly swiped him through. A policeman witnessed the exchange, arrested the boy, and let the woman off with a stern warning, though what law she had broken is unclear. The policeman now had cause to search the kid and found the remnants of a joint in his pocket—crumbs of pot. Though he had no prior arrests, he was now facing two charges: marijuana possession and theft of services, a class A misdemeanor punishable by up to a year in jail. He wouldn’t do time, most likely, beyond his current incarceration, but he feared, with good reason, that the financial aid a college in Pennsylvania had granted him for his freshman year would be rescinded.

More examples of petty misdemeanor arrests—which have increased or essentially stayed the same during de Blasio's tenure, can be found in a report written by the Police Reform Organizing Project.

“As of yesterday, marijuana arrests are down in New York City compared to this time last year, with the most common possession category down 2.5 percent or 615 arrests," says Phil Walzak, a press secretary for Mayor de Blasio, referring to the total number of low-level arrests since January. "The administration and NYPD are continuing to implement reforms that bring police and community closer together.”

#Bill Bratton
#broken windows
#marijuana
#mayor de blasio
#misdemeanor arrests
#war on drugs
Do you know the scoop? Comment below or Send us a Tip