Since Hurricane Sandy hit the city last Monday, we've seen many confirmed and unconfirmed reports of looting happening everywhere from McCarren Park to the Rockaways, Coney Island to New Jersey. It seems as though looting has not been extremely widespread, but it is a serious problem for many neighborhoods hardest hit by the storm—and it's happening both to stores/local businesses as well as at people's homes.

More than ten people (the Post says 18, the News says 11) were busted for looting a Key Foods in Coney Island on Wednesday were busted this week. They have been accused of stealing items such as toilet paper, diapers, and candy. “I’m not a criminal. What am I supposed to do? Let my grandmother starve?,” one of the suspects, Justin Diaz, said as he was being arrested, according to court papers.

Four teens were arrested in Long Island for allegedly looting a convenience store to throw themselves a post-hurricane party at nearby park. According to cops, they allegedly broke into a Dairy Barn store in Syosset at 11 p.m. Tuesday, grabbing beer, cigarettes and food. ``They took the proceeds to the park to enjoy them,’’ one officer told the Post. ``They had a party. When they ran out, they returned to the store a second time and removed additional items.’’

Brothers Jason and Brian Otano told us about a looter who broke into a neighbor's house this week: "One person made the fortunate mistake of going into a retired officer's house," said Jason. "It didn't turn out well for him." The brothers have taken to sleeping with knives, fire extinguishers, and other weapons, and have been keeping an eye out for their neighbors after sunset.

Chris Lane, a 50-year-old resident of the Coney Island Houses, told the Post he put together a small arsenal, including a double pump action gun, to ward off any possible looters. He says he already had to scare some off on Monday night: “They were roving in packs, not just one or two people. I had more than a little something, too,” Lane said, referring to his weapons. “I let it be known that my floor is off limits.”

An entire Coney Island pharmacy was looted by 8 a.m. Tuesday, according to the Huffington Post; the suspects stole as many as 10,000 prescription pills. “The water went away and these people started walking down the streets and just robbed stores,” one pharmacy worker said.

“I saw this guy stealing televisions from a nursing home right on the boardwalk on Tuesday, and the workers were chasing him up the street," Ben Cooper, who lives on the Rockaway Peninsula, told the Christian Science Monitor. “Every time I saw him, he had a different TV.” 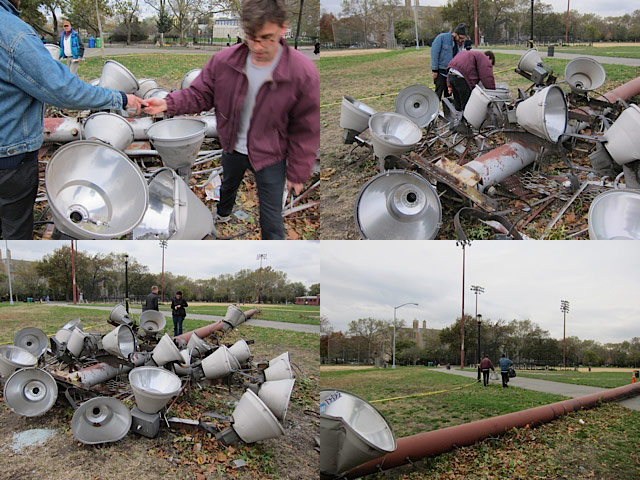 Tipster G. Wong told us he spied some looting going on in McCarren Park in Brooklyn Friday: "I took some shots in McCarren and caught these hipsters looting the fallen “stadium” lights." You can see them in the photos above. We asked NYC Parks Advocate Geoffrey Croft whether he thought this constituted looting: "The majority of the light fixtures look like they're in pretty good shape."

Eric Handy wrote us with this description of the Rockaways, from the B 100s and 60s areas: "I have never seen anything like it out there. People are fighting in the streets for gas, asking if they know where anyone can find food. FEMA trucks and generators are in the area now and some food distribution sites and places for people to charge their phones are out there but not all easily accessible for everyone. Giant apartment buildings and projects have groups of residents waiting outside with baseball bats to chase out looters. You wouldn't think you were in the US seeing this place."

And then, there have been reports of looters pretending to be city or utility workers to get into people's homes. According to the News, some have been masquerading as Long Island Power Authority (LIPA) workers in the Rockaways, knocking on doors in the dead of night. “We booby-trapped our door and keep a baseball bat beside our bed,” said Danielle Harris. “We heard gunshots for three nights in a row."

And then there are the ones allegedly posing as Con Ed workers: “This morning when they told us the water receded, I walked back to the house to feed [my pets],” Eric Martine, a cabby who lives in Gerritsen Beach, told the Post. “Guys were looting, pretending they were Con Ed and holding people up. It was sick.” Con Ed didn't respond to our question about the alleged impostors, but they did tweet: "All Con Edison employees have legit IDs; worried about imposters: call 1-800-75CONED or 911."

#brooklyn
#hurricane
#hurricane sandy
#looters
#looting
#queens
#sandy
Do you know the scoop? Comment below or Send us a Tip