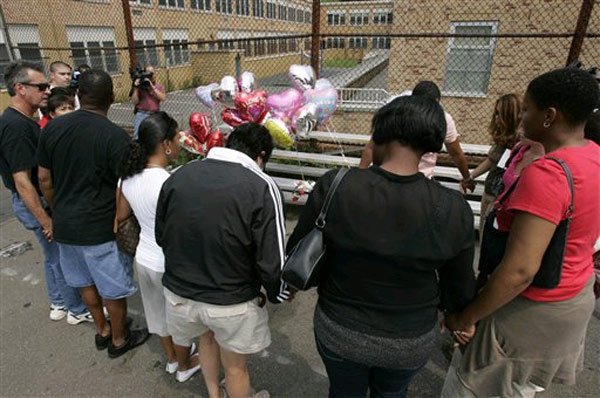 The NY Times reports that Newark authorities may be close to naming a suspect in the Saturday night execution-style shootings of four people. Three friends were killed, while the fourth, Natasha Aerial, survived being shot in the head and has been talking to investigators. The Star-Ledger offered this description of the crime:

Aeriel, her younger brother, Terrance, and two of their friends, Dashon Harvey and Iofemi Hightower, had driven to the school playground to drink, eat and listen to music, authorities said. But at around 11:30, a group of Hispanic men gathered near them. Scared, the friends exchanged text messages saying they should leave.

But it was too late. The men announced a robbery, police said. The victims apparently tried to fight back. Natasha Aeriel was shot first, through the face. The other three, all students at Delaware State University, were then taken to a school wall, forced to kneel and shot in the back of the head. The attackers also had a knife; Hightower was found with slash wounds in her forearm.

Newark Mayor Cory Booker spoke at a meeting in the middle-class neighborhood of Ivy Hill, where the shootings took place in a schoolyard, promising additional police presence and asked for help from residents as well as his political adversaries for solutions to the crime problems: "We will either rise as a community or fall apart." And at a baseball game between police officers and the VA department, Booker also said, "I have been shaken but not deterred by this weekend. We can stand up and win this fight against crime."

And there is speculation that the shooting could be gang-related, possibly a gang-initation. Investigators noticed tags in the schoolyard that seem to refer to the Bloods.

Tom Moran's column in the Star-Ledger today is titled, "For a desperate city, a defining moment" and notes how authorities and politicians are, in fact, upset and desperate enough to consider suspending civil liberties: "Councilman Ron Rice Jr., who represents the Ivy Hill neighborhood where these killings occurred... [said] "I have a community that is scared right now, and they have a right to be. They would have no problem with officers getting out and frisking people. For all the claims about civil liberties, if it's going to keep them safe, they're all for it." Of course, that won't happen, but Moran hopes that Newarkers will "come up large" by telling the "police what they see and hear, and take the risk of testifying at trial."