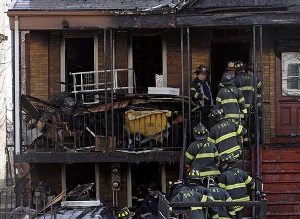 It's been three months since the tragic fire in a Bronx family home that claimed the lives of one adult and nine children. Mamadou Soumare, who lost his wife and four children in the blaze, has filed a notice of claim, with the FDNY, Department of Buildings, Department of Housing Preservation and even his cousin, Moussa Magassa, who owned the building, as possible defendants.

The fire was started by an overheated space heater cord on the first floor on March 7, and the house did not have working smoke detectors either. Soumare claims the FDNY didn't respond in a timely manner"; the FDNY arrived 3 minutes 23 seconds after a neighbor called 911, the residents tried to put the fire out themselves before going outside for help. And when the FDNY arrived, a gate to the back of the house was locked.

The claim also says that Magassa was "negligent in his ownership and operation of the premises" and that city agencies should have inspected the building more often. Magassa did hire a contractor to put sprinklers and a metal staircase into the home, but work was held up because paperwork was incomplete.

Soumare, a cab driver who returned home to discover the fire and that most of his family was gone (one child was in the hospital, but later died), would be seeking $100 million in damages, if he sues. Soumare's attorney told the Post, "Clearly he's not engaged in an adversarial [action]. His interest is in going forward and rebuilding his life. People have reached into their own pockets to help this man out of...the plight that he's gone through." The city's comment was, "Obviously this involves a very tragic case, and we certainly will review the case thoroughly."