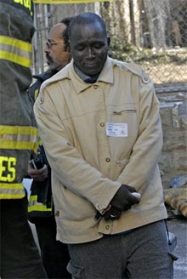 Yesterday, the Post revealed that Mamadou Soumare had filed a notice of claim, giving him the right to file a lawsuit in the future, related to the Bronx fire that claimed the lives of his wife and four children. But now Somare tells the Daily News that he's not so sure about the lawsuit anymore.

The defendants in the notice of claim included various city agencies - FDNY, Department of Buildings - as well as Moussa Magassa, who owned the house; the notice of claim said that the various parties were liable for $100 million in Soumare's suffering, mental anguish, lost wages, etc. Now Soumare says, "This is not what I want, the city and firefighters were so good to us...The Magassas are my friends; they suffered too...I don't want to sue." Is it too much to suspect an opportunistic lawyer in the mix? We think a reader's suggestion of clamping down on ambulance chasers is great.

And Mayor Bloomberg gave his two cents about a possible lawsuit: "I don't think there's any basis for a suit and I don't know that there's going to be a suit. Papers were filed that gives them the right to sue. But keep in mind that people tragically, in the building where all the deaths occurred, didn't call the Fire Department for a while." The fire, which claimed ten lives, was caused by an overheated space heater's cord; the home did not have working smoke detectors.

Photograph of Soumare by Louis Lanzano/AP