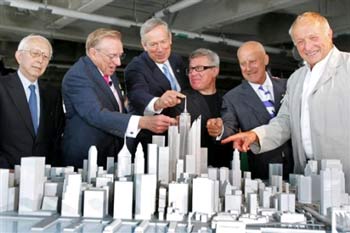 Wow - yet depressingly not surprising: The Port Authority will have to pay World Trade Center developer Larry Silverstein $300,000 for every day past December 31, 2007 that it does not turn over a part of the WTC site. The payment could be as much at $13.5 million or as little as $9.3 million.

The PA and Silverstein worked out a deal back in 2006 where the PA would control the land but Silverstein, who was the leaseholder during the time of the WTC attacks, would be able to build on top of it. The deal required the PA to be completed with excavation by yesterday, but according to PA spokesman Steve Coleman, the excavation has been made more difficult by more than expected rock.

Silverstein Properties said, "We appreciate how much the Port Authority has accomplished this year, and a few extra weeks to complete everything is a minor bump in the road in the context of this entire project." The Real Estate has the Port Authority press release, which gives an broader look at the WTC site project as a whole.

#fumihiko maki
#ground zero
#larry silverstein
#port authority
#real estate
#redevelopment
#Richard Rogers
#Rogers
#Silverstein Properties
#Steve Coleman
#The PA
#The Port
#The Port Authority
#The Real Estate
#Trade Center
#world trade center
Do you know the scoop? Comment below or Send us a Tip
A new Gothamist is coming! We’ve moved comments over to our beta site. Click here to join the conversation and get a preview of our new website.