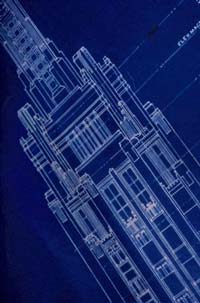 Internal investigators at the Port Authority are faulting the overwhelming bureaucracy surrounding the construction of the Freedom Tower for the loss of confidential blueprints that could have left the new building vulnerable to those determined to strike the WTC again. Per the New York Post, "Experts say there was enough detail in the blueprints to lead to a devastating terrorist attack."

Homeless man Mike Fleming found the 150 page document labeled "Secure Document -- Confidential" while sifting through a trash container on the corner of Sullivan St. and West Houston St., and then turned it over to the Post. The Port Authority actually has a 60 page guide on the proper control and disposal of confidential documents that doesn't include instructions to toss them in a trash can on the street where anyone can pick them up. And according to Newsday, one of the rules is that secure documents are not even supposed to be taken out in public, let alone left there.

Violations of security protocol could lead to someone at the Port Authority being fired or a construction company to lose its contract at the site. In an editorial piece today, the Post excoriates the Port Authority for a blunder that resulted in the most detailed information about the building released to the public to date being discovered by a homeless recovering drug addict. Fleming himself noted, "This could have ended up on eBay."