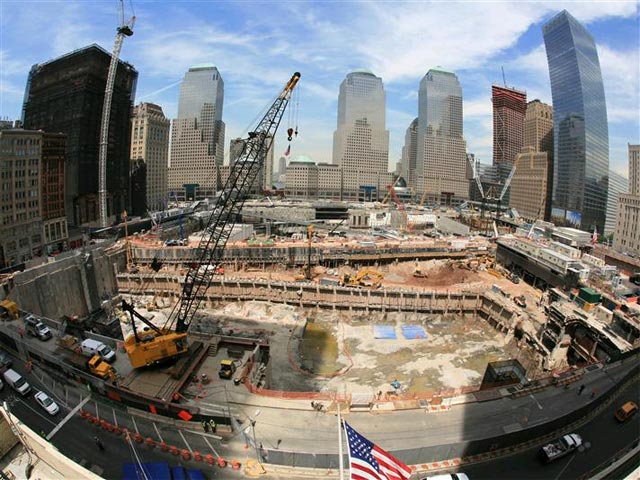 The Port Authority released its status report of sorts about World Trade Center rebuilding, and it's a document (PDF) that grimly forecasts lots of patience and money--along with the difficulties--needed to see the whole thing through and.

PA Executive Director Christopher Ward prefaces his assessment with a note that highlights how previous costs and rebuilding timeline estimates were not realistic, there are tons of stakeholders involved, there's no "efficient, centralized decision-making structure" with the authority to make final decisions in place, and the logistics of all the projects are unprecedented. Here's how Ward explains the challenge:

To put this challenge in perspective, the WTC rebuilding program attempts to fit within the size of just a few city blocks:
• Five major skyscrapers, which will house Class A office space comparable to all of
downtown Atlanta;
• One of the world’s most significant memorials and museums;
• The third-largest transportation hub in New York City;
• A world-class retail venue serving all WTC users;
• A major performing arts center;
• A state-of-the-art vehicle security center;
• Two brand-new city streets (Greenwich and Fulton) and two brand-new pedestrian ways (Cortlandt and Dey); and,
• All of the critical infrastructure to support these projects (chiller plant, utility and communication networks, etc).

And all of this is happening within the confines of a transportation corridor that moves 150,000
commuters a day through an active construction site via the MTA #1 subway line, which literally cuts through the center of the site, and the WTC PATH Terminal, which runs beneath the site.

No specifics are given in terms of costs and added time, but basically it boils down to tacking on a a few more years to each project and about $1-3 billion to the entire estimate of the project (however, these numbers are just estimates and the actuals may be smaller).