Port Authority Bus Terminal Will Be Replaced By SOMETHING

The Port Authority is embarking the long-awaited replacement of its heavily trafficked—and deeply reviled ("The Single Worst Place On Planet Earth")—bus terminal in Midtown Manhattan.

The agency, which is overseen by both New York and New Jersey, released its scoping document (PDF) Tuesday, which kicks off what the Port Authority calls a "robust 120-day public outreach process to solicit formal comment from elected officials in New York and New Jersey, the City of New York, neighborhood residents, other stakeholders and the public on plans for a new Port Authority Bus Terminal." There will also be four public hearings (two in NY, two in NJ) held in July and September.

Originally the agency considered 13 possible replacement plans, but eliminated the others when they failed to account for bus trips during peak hours or would require acquiring private property. The bus terminal was built in 1951 (and was charming for a short time, and then underwent expansion in 1981). It serves about 260,000 trips on weekdays, "or 23 percent of trans-Hudson trips entering or exiting Manhattan’s central business district," per the P.A., which thinks demand will increase by 30% with a higher-capacity terminal, resulting in up to 337,000 weekday passenger trips by 2040. 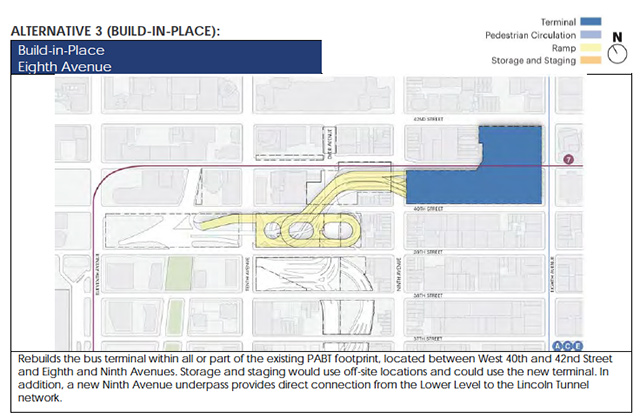 The "build in place" plan, according to NJ.com, "would not require condemning property in the neighborhood and would be less costly than the earlier estimated $10 billion price tag." That option would see two additional floors and also preserve access to the A/C/E subway lines as well as the transfer to Times Square subway lines. 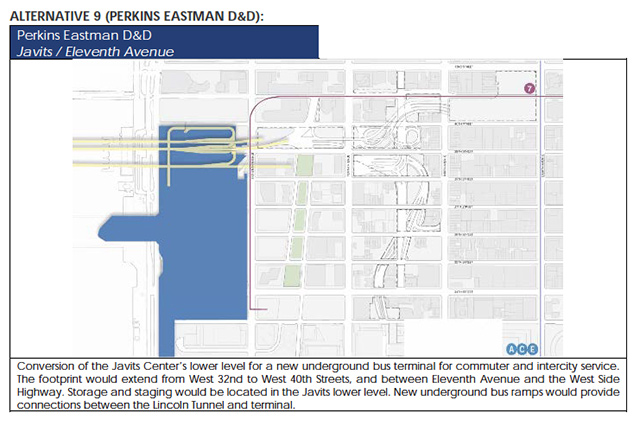 The scoping document outlined the following challenges for entirely moving the bus terminal to the Javits Center (proposed by Perkins Eastman in the design competition): "the likely shutdown of lanes and full tunnel tubes" in the Lincoln Tunnel; the costly replacement of the Lincoln Tunnel's existing ventilation system; raising (!) the West Side Highway "which would also likely require shoring and underpinning of a highway that is the only major capacity roadway on the west side of Manhattan"; and needing "additional in-water construction and extensive permitting actions" for a pier. 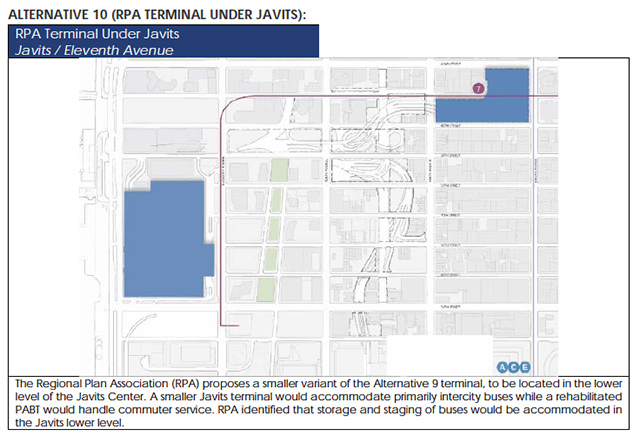 The proposal that would split bus operations between the O.G. bus terminal and Javits Center, presented by the Regional Plan Association, would help meet demand by 2040, but obstacles include "Meeting Americans with Disabilities Act (ADA) requirements without reducing capacity"; "Accommodating heavier, taller, and longer buses"; "Incorporating new building, bus operation and passenger technologies"; and "Providing the adequate amount of passenger queuing space at gates and within the facility."

Whatever plan wins out, the Port Authority expects the cost to land between $7.5-10 billion. Port Authority Executive Director Rick Cotton emphasized, "The scoping document is a proposal. It’s a draft. The board of commissioners will act based on not only what has been proposed … but will also act on the basis of input."

The dates and times of the public hearing have yet to be determined. In the meantime, the Port Authority is hyping its "$110 million Quality of Commute program to enhance the customer experience at the existing facility," which includes "new and enhanced retail, new bathrooms, new doors at the terminal’s 8th Avenue entrance, new lighting and ceiling and improved elevators and escalators."

Extra Extra: New York City is one of the worst places to be single, at least WalletHub says

It's too expensive to date in NYC, but we do have some tips for saving on groceries. Also: more rat stuff, weed delivery could be legal soon, and more stories from the Big Apple.

What forced hospitalization feels like in New York City, as Mayor Adams pushes for more

Some hospital emergency rooms and psychiatric units are already strained – as are the community programs that are supposed to support people upon release.

By
Caroline Lewis
What forced hospitalization feels like in New York City, as Mayor Adams pushes for more

Some hospital emergency rooms and psychiatric units are already strained – as are the community programs that are supposed to support people upon release.