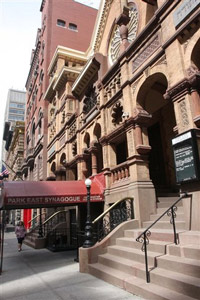 When Pope Benedict XVI visits NYC this month, one of his stops will be to a synagogue on Manhattan's Upper East Side. It will be the first time a Catholic pope has visited a Jewish temple on U.S. soil, although it will be Benedict's second visit to a synagogue as pope after a 2005 trip to his native Germany. The visit continues a movement for ecumenicism and interfaith dialogue that was strongly supported by the current pope's predecessor.

When he was first appointed, Pope Benedict faced some criticism for his membership in the Hitler Youth during WWII and his conscription into the German army, from which he deserted. More recently there was controversy over the reintroduction of a prayer to the pope's Holy Week services, which alluded to Jewish people's blindness in not accepting Jesus as a messiah.

New York, which has one of the largest Jewish populations in the world, seems like a good place for the Catholic leader to start building bridges, and was viewed as damage control by some. The Pope will be visiting with Holocaust survivor Rabbi Arthur Schneier at the Park East Synagogue and meet Jewish schoolchildren on the eve of Passover. One orthodox Jewish Brooklyn resident told NY1, “Let him come, let him build good relationships and goodwill between all communities, and we definitely welcome him."

#hilter youth
#park east synagogue
#pope
#pope benedict
#potpourri
#rabbi
#upper east side
Do you know the scoop? Comment below or Send us a Tip