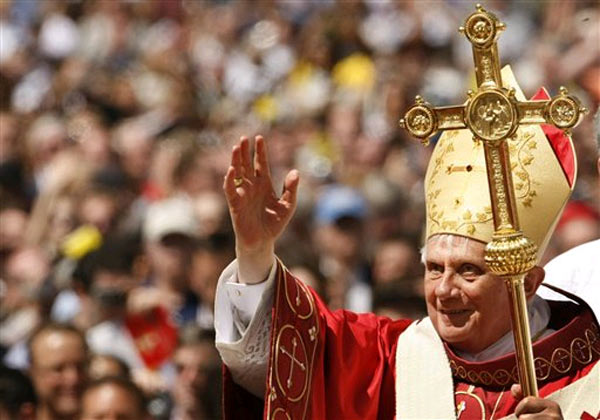 Photograph of Pope Benedict at Nationals Parks in Washington, DC by Gerald Herbert/AP

Pope Benedict's trip the United States is already historic, but yesterday he did something that heightened the dramatic quotient of his journey: He privately met with five or six people who had been sexually abused by priests in the Boston area.

Boston Cardinal Sean O'Malley also gave Pope Benedict a notebook with the names of almost 1,500 men and women, who were abused by priests from the Boston Archdiocese over the past six decades. The NY Times reports the pope "had requested the meeting" and the "pope prayed and spoke personally with each of them, in a meeting that lasted about 25 minutes." A Vatican official said some wept.

One victim, Olan Horne, 48, told the Boston Globe he gave the pope a photograph of himself as a "as a 9-year-old boy, just before the Rev. Joseph E. Birmingham started molesting him." Horne said, "I asked him to forgive me for hating his church and hating him. He said, 'My English isn't good, but I want you to know that I can understand you, and I think I can understand your sorrow.'"

In an hour, NY Archdiocese officials as well as local officials (Mayor Bloomberg, Governor Paterson) will be on hand to welcome Pope Benedict to the Big Apple. There will be many street closures, mostly in Manhattan, as the Pope visits the U.N., the Park East Synagogue, and St. Joseph's Church today.

#Catholic Church
#d.c.
#nyc
#pope benedict
#popepourri
Do you know the scoop? Comment below or Send us a Tip