After speaking to Congress and lunching with homeless D.C. residents, Pope Francis arrived in NYC for his 40-hour stay in the Big Apple. Normally chill New Yorkers braved locked down streets to catch a glimpse of the progressive Holy Father. And it makes sense that during his evening vespers remarks at St. Patrick's Cathedral, he renewed a call for everyone to be more generous and caring to the needy—"the poor, the refugee, the immigrant, the sick, the exploited, the elderly living alone, prisoners and all God’s other poor."

“We can get caught up measuring the value of our apostolic works by the standards of efficiency, good management and outward success which govern the business world,” he told them in Spanish. Similarly, he said, they should guard against surrounding themselves with worldly comforts, as that can separate them from the poor they are intended to serve.

“Rest is needed, as are moments of leisure and self-enrichment, but we need to learn how to rest in a way that deepens our desire to serve with generosity,” he said.

He also gave his profound thanks to women serving the Catholic church, "To you, religious women, sisters and mothers of this people, I wish to say thank you, a big thank you and to tell you that I love you very much." Here's his full text.

Pope Francis landed at JFK Airport in the afternoon, where he met with about 200 people and was greeted by a "high school brass band serenading him with 'New York, New York,' on the airport tarmac." Catholic school children gave him prayers written by other students in 86 Catholic schools. The Pope was amused by a Pope plush doll and left by helicopter, flying to the downtown Manhattan heliport. Then he traveled uptown by way of his Fiat hatchback:

Just happened to get a glimpse of the #pope ! #popemobile

When in Midtown, the Pope switched to his Popemobile on his way to St. Patrick's Cathedral—with thousands of people cheering for him and hoping to get that perfect video:

At the St. Patrick's, which recently underwent a $177 million renovation, the Pope was greeted by Mayor Bill de Blasio, Governor Andrew Cuomo and Senator Chuck Schumer. The Daily News reports, "As Francis made his way to the altar, he stopped to greet some of the people in the pews, including a young girl in a wheelchair. Francis began the prayer service with a greeting to 'our Islamic brothers,' who are mourning the deaths of more than 700 pilgrims who were killed in a stampede in Mecca. He also tried to buck-up the priests who “suffered greatly” and have had to 'bear the shame' of the pedophiles in their ranks."

Dolan asked the Pope to bless the church and also told him, "As soon as you walked through the doors, you became a New Yorker. Thank you for stopping by, come back soon."

On the schedule tomorrow are: 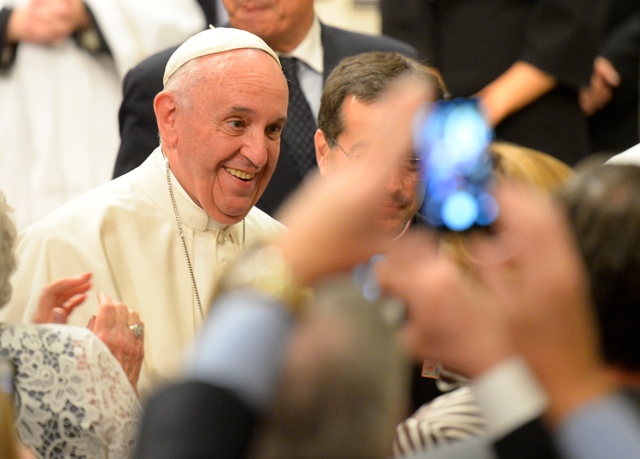 There will be street closures and mass transit issues.

#Catholic Church
#pope francis
#pope in nyc
Do you know the scoop? Comment below or Send us a Tip
A new Gothamist is coming! We’ve moved comments over to our beta site. Click here to join the conversation and get a preview of our new website.