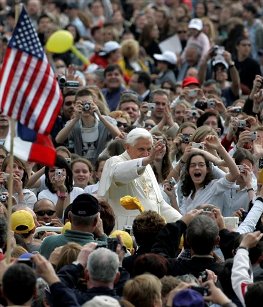 The NYPD is making sure security is high for Pope Benedict's visit to New York City next week. Not only will there be undercover cops with "pager-sized radiation detectors" and bomb-sniffing dogs, there will be sharpshooters, scuba divers, and others, plus the Secret Service and the Pope's Swiss Guard, on hand.

Yesterday, Police Commissioner Ray Kelly said, "We will provide the highest possible level of security while accommodating the public in welcoming the pontiff." He added, "While we are not aware of any specific threats to the pope, we are obviously cognizant of the fact that Osama bin Laden in his latest video tape was critical of the pope."

Pope Benedict arrives next Friday (his itinerary is after the jump) and will be visiting the United Nations, the Upper East Side, lower Manhattan, Yonkers, and the Bronx, making stops at different churches, Ground Zero Yankee Stadium, and a synagogue.

Since the 5,000 tickets to his mass at St. Patrick's Cathedral on Saturday, April 18, were quickly snatched up, the Archdiocese of New York recommends people line Fifth Avenue from 50th Street all the way up the 70th Street to see the Pope traveling in his Popemobile. While Pope Benedict is expected to leave the St. Pat's around 1:15 p.m., spectators should line up well before that time; WCBS 2 recommends people go a little north of St. Pat's, because that will be a frozen zone open to ticket holders.

Needless to say, traffic will be a mess and there are a number of street closures.

# Saturday, April 19, 9:15 a.m.
Mass for priests, deacons and members of religious orders at St. Patrick’s Cathedral in the heart of New York City.

# Saturday, April 19, 4:30 p.m.
The Holy Father will meet with young Catholics, including 50 youngsters with a range of disabilities, at St. Joseph Seminary in Yonkers. Thousands of young people, including hundreds of seminarians, are expected to participate in a rally/prayer service and to hear the pope speak.

# Sunday, April 20, 9:30 a.m.
The Holy Father will visit Ground Zero, the site of the disaster at the World Trade Center.

# Sunday, April 20, 2:30 p.m.
Mass at Yankee Stadium will bring this historic visit to a close. The 200th anniversary of the Baltimore Archdiocese’s designation as an archdiocese, as well as the birth of four dioceses – Boston, New York, Louisville and Philadelphia – will be highlighted during the Mass.

# Sunday, April 20, 8 p.m.
Shepherd One lifts off from John F. Kennedy airport in the Brooklyn Diocese, heading east to the Eternal City.

#papal visit
#pope benedict
#popepourri
#st. patrick's cathedral
Do you know the scoop? Comment below or Send us a Tip