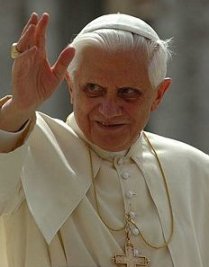 Mark this in your calendars: NYC traffic will be bananas between April 15 and April 20, when Pope Benedict XVI makes his first visit to New York City.

Like many tourists to the Big Apple, the pope will visit Ground Zero - the Vatican says that he wants to show "solidarity with those who have died, with their families and with all those who wish an end of violence and in the search of peace." Unlike many tourists, Pope Benedict will address the United Nations on April 18 and give a public mass at Yankee Stadium on April 20. On other days, Benedict will be in D.C.

On Benedict's last visit to NYC, back when he was just Cardinal Joseph Ratzinger in January of 1988, he was heckled by protesters for calling homosexuality a "moral disorder." And no word on what community groups the Pope might be interested in seeing, but we'd like to point out that Pope John Paul welcomed break dancers back in 2004. And Pope John Paul visited NYC twice - in 1979 and in 1995. But St. Louis University Catholic historian, James Hithchcock, said, "I don't think he is going to make the sort of impact John Paul did. Benedict can't do it and doesn't want to do it. think it's a very different kind of appeal.''