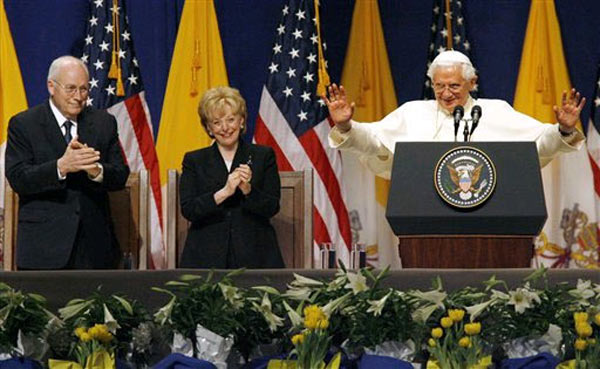 Pope Benedict XVI left New York City this evening, telling 4,000 people who gathered at JFK Airport, "It has been a joy for me to witness the faith and devotion of the Catholic community here." He called his address the United Nations one highlight and said, "My visit this morning to Ground Zero will remain firmly etched in my memory, as I continue to pray for those who died and for all who suffer in consequence of the tragedy that occurred there in 2001."

Vice President Dick Cheney and his wife Lynne hosted the farewell ceremony, which took place at hangar 19. Cheney mentioned the Pope's "universal message of hope and salvation" and called the visit an opportunity for "days of reflection and personal renewal" for many. And the Vice President added:

Here in New York, you have addressed representatives of many nations and celebrated the Eucharist before many thousands and you have moved us by your visit to ground zero. There, you prayed for eternal light and peace upon the innocent victims of September 11th, 2001, and you asked that the rest of us may live so that all who died on that morning may not have been lost in vain. That is our daily meditation as well, and it remains our daily prayer. 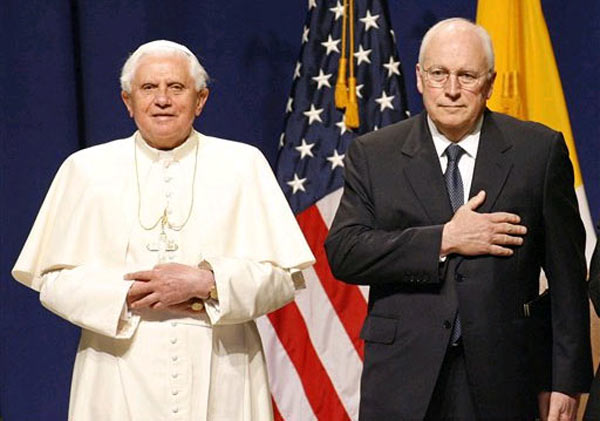 Besides the Cheneys, other dignitaries were present, including Cardinal Egan and Mayor Bloomberg. And before leaving in Shepherd One, the Catholic News Services reported that the Pope received "a replica of a stained-glass window from the Cathedral Basilica of St. James in Brooklyn" from "four elementary school-age children whose families are from Ecuador, Germany, Trinidad and Korea."

#dick cheney
#papal visit
#pope benedict
#popepourri
Do you know the scoop? Comment below or Send us a Tip
A new Gothamist is coming! We’ve moved comments over to our beta site. Click here to join the conversation and get a preview of our new website.