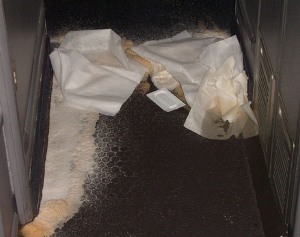 Okay, so being stranded on a grounded Jet Blue flight for hours and hours on end with the airport in sight is no good. But we think the passengers of a Continental flight from Amsterdam to Newark win the "Woe in my plane ride." Because they had to endure a flight with backed-up toilets that caused sewage to seep down aisles.

Last week, passengers flying back to Newark had to stop in Shannon, Ireland because the plane's toilets weren't working. The stopover became an overnight stay, and then the passengers boarded the same plane, only for the sewage to overflow after takeoff. And then the sewage actually ran down the aisles.

One passenger, Colin Brock, took photographs as evidence of the horrible flight and said, "I've never felt so offended in all my life. I felt like i had been physically abused and neglected. I was forced to sit next to human excrement for seven hours." He added that flight attendants told passengers not to eat or drink much, "To be told that we were supposed to monitor what comes out the other end of us was insulting. Shame on continental. It was the worst flight experience I have ever had."

Metblogger Dana Bushman described her journey on the smelly plane (she cashed in 200,000 Continental frequent flier miles for a trip for herself and her boyfriend) and added this amazing punchline: "Eight hours later, 32 hours into the whole ordeal, we are in Newark, ready for the fun of customs and immigration, and on our way out of the gate Continental issues the final slap in the face--a voucher for one free drink the next time we fly with them!"

Photograph by Colin Brock; apparently powder and paper towels were towels were used to sop waste

#fun
#immigration
#jet blue
#News: NYC
#plane
Do you know the scoop? Comment below or Send us a Tip