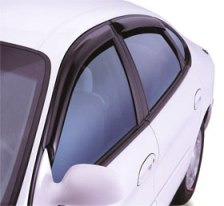 Lawmakers are looking to toughen laws around tinted windows on automobiles. Public Advocate Betsy Gotbaum pointed out that police officer Russel Timoshenko was fatally shot when he approached a stolen SUV with tinted windows. And current State Senator Eric Adams (a retired police captain and a founder of 100 Blacks in Law Enforcement Who Care) summed it up, "The criminal element does not use tinted windows to protect themselves from dangerous UV rays. They use them to protect their illegal activity."

The Daily News explains the current laws: Front and driver's side windows cannot allow less than 70% of light inside the car, while the passenger and rear windows can have darker tints. But many times, vehicles have too-tinted windows - in May, Busta Rhymes' Denali was pulled over for having excessively tinted windows.

Stricter laws would include $250 fines on tinted windows, fines on businesses that tint windows illegally, a ban on do-it-yourself-tinting kits, and tinted windows to be checked during inspections. City Councilman Peter Vallone Jr. said, "If [the police are] approaching an opaque window, it's the same as breaking down the door of a crack house with a blindfold on."