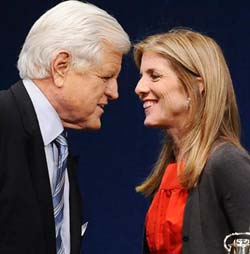 A Marist poll finds New York Democrats prefer Caroline Kennedy over NY Attorney General Andrew Cuomo to replace Hillary Clinton in the Senate, 31% to Cuomo's 21%. However, among all respondents, Kennedy and Cuomo each get 25%—and 26% aren't even sure who they would want! After that, less familiar (dare we say less dynastic) names like Byron Brown, Kirsten Gillibrand, Nydia Velazquez and Tom Suozzi are in the single digit percentages.

Kennedy, whose interest in the Senate seat was first reported last week, spoke at a fund-raiser for St. Vincent's Hospital. However, she didn't touch on politics during or even before and the event. Some stake-out surveillance from the Post: Kennedy "did not utter a word when questioned repeatedly by a Post reporter as she entered the hotel... Afterward, she was again mum as she ducked into a chauffeured car. She chuckled when asked about a tattoo of a butterfly she sports on her right arm, before the car took off."

And over at the Old Gray Lady, the NY Times had to print a correction after initially claiming that Kennedy's uncle, Senator Ted Kennedy, had called Governor David Paterson to lobby on his niece's behalf. (Before the Times mentioned the elder Kennedy's lobbying, Post had mentioned the Uncle Ted push, too.) The Times now reports that Paterson says he hasn't hear from Ted Kennedy in years (perhaps a subtle message that he wants to hear from Ted?) and the Senator's spokesman said, "Senator Kennedy has not contacted anyone in New York regarding the possibility of Caroline Kennedy serving in the Senate." Still, in an editor's note, the Times says, "The information [about Ted Kennedy's call to Paterson] was attributed to Democratic aides, speaking anonymously."