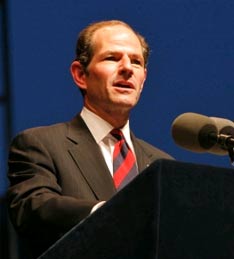 It's turns out that a dirty tricks campaign - even if it's not quite criminal - can be pretty damaging. A new Quinnipiac poll shows that Governor Spitzer's approval rating has dropped to a new low of 47%. Of course, that's the low after nine months in office, so there's still room for improvement - or to find a new low.

Most intriguingly, more than three-quarters of voters want Spitzer to testify about the scheme to smear political rival, State Senate Majority Leader Joseph Bruno, and more than half believe Spitzer knew what his aides were doing (despite the governor's repeated denials). Still, the Quinnipiac Poll's director Maurice Carroll said, ""Troopergate is still bad news for Gov. Eliot Spitzer, but the good news is that his job approval plunge has leveled off. His approval sagged in July but hasn't changed since."