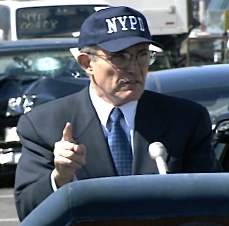 The Patrolmen's Benevolent Association president Patrick Lynch issued a statement blaming the former mayor for not giving cops raises ("zeroes for heroes" contract) and essentially creating the recruiting/retainment problems the NYPD has. And then there's what the PBA thinks about Giuliani's 9/11 record:

Giuliani has wrapped himself firmly in the cloak of 9/11 for his own political purposes. But the real heroes of 9/11, those who helped to evacuate those towers and lived to tell the tale and all those who participated in the recovery and cleanup, know the truth. Rudy Giuliani has no real credentials as a terrorism fighter. His only credentials lie in managing the cleanup after a terror attack. The New York City Patrolmen’s Benevolent Association could never support Rudy Giuliani for any elected office.

That's gotta hurt! Giuliani's campaign response? "Mayor Giuliani continues to have strong support from the law enforcement community, which knows his long record of supporting New York’s Police Department and working with the department to make New York the safest large city in America." Where's the mention of Bernard Kerik?