When NYPD Officer Peter Liang entered court this week to stand trial for killing 28-year-old Akai Gurley in November 2014, there was a noticeable absence in Brooklyn Supreme Court. The usual throng of supporters from the Patrolmen’s Benevolent Association, and its boisterous head Pat Lynch (who rarely misses an opportunity to grandstand) were nowhere to be seen.

Instead, just two older PBA members loitered around the courthouse and kept to themselves. This was a stark difference from previous police misconduct trials, where the PBA has put itself directly in the spotlight to broadcast its steadfast faith in the near total infallibility of police officers.

“The PBA is obviously absent,” a former NYPD officer who has been in attendance at the Liang trial told Gothamist. “The two guys who showed up were wearing windbreakers, not even suits. They looked like gangsters, and here’s a cop in Brooklyn Supreme Court, fighting for his life, and pretty much no one is there.”

The PBA’s lack of support has created a perception among Liang’s supporters that the city’s largest police union would not be treating a white police officer accused of the same crimes in this manner. After a grand jury declined to indict NYPD Officer Daniel Pantaleo for fatally choking Staten Island resident Eric Garner, Pat Lynch called Pantaleo "the model of what we want a police officer to be."

Asians make up 6% of the NYPD, while they make up 13% of New York City's population. Almost 85% of NYPD leadership are white.

Exasperated, Liang’s mother, Ho Fong, reached out to Eddie Chiu, the president of the Lin Sing Association, which advocates on behalf of the Chinese community in New York City, to help her son pay for better legal support.

“His mother kept trying to get through to his PBA attorneys, but they wouldn’t answer her calls,” Chiu told us on Wednesday afternoon in the Chinatown offices of the 116-year-old organization.

After Liang's indictment, and the PBA's unresponsiveness, Chiu says Fong asked him whether they could trust Robert Brown, an attorney and former NYPD officer who had worked with Chiu previously on a number of cases involving the Asian community, and he said yes. In November, Liang dismissed his PBA-appointed lawyers.

“Listen, the PBA lawyers have a lot of cases. A private attorney will see you today and tomorrow, and so far we’ve raised around $40,000 for officer Liang’s defense,” Chiu told Gothamist

“Big and small donations, mostly averaging around $300.” Chiu leafed through envelopes containing checks sent in by supporters of Liang, ranging from $50 to $3,000 dollars.

He also produced a Christmas letter sent to him by officer Liang thanking him for “all that you have done for us during this dark time in my life.”

“A lot of people are asking me why a Chinese officer is getting put on trial when all the other police killings never went to trial,” Chiu said. “Why everybody else is innocent and only the Chinese man goes to court? People are very upset about that.” 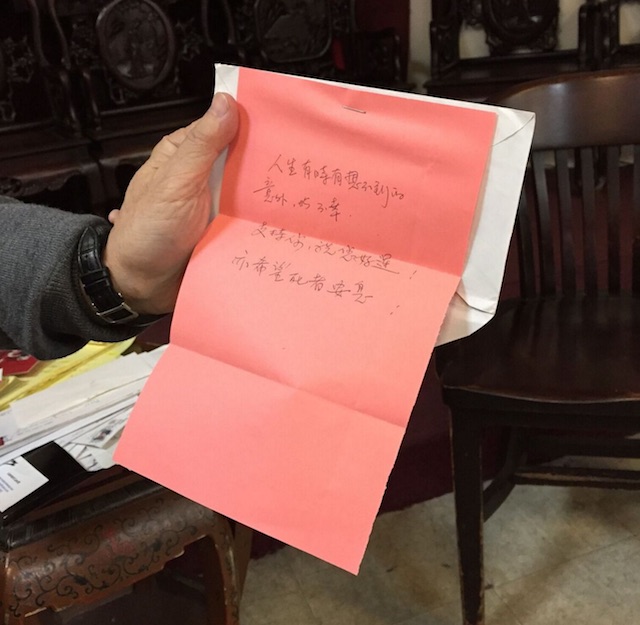 Chiu isn’t sure why the PBA hasn’t turned out for the trial. The former NYPD officer who spoke to Gothamist believes that some of the reason might lie in bitterness on both sides over the decision by the PBA attorneys to not to have Liang testify in front of a grand jury. His partner, who is white, was granted immunity by testifying.

“I believe that had officer Liang testified, there would not have been an indictment handed down,” said Karlin Chan, the Executive Director of the Chinese Action Network, an organization that has also helped garner support for Liang.

But support for Liang in the Asian-American community is not uniform. CAAAV, which formed in 1986 as the Committee Against Asian-American Violence, was one of the first groups to come to the support of the Gurley family, and has acted as the main liaison between them and the media.

“In 1995, CAAAV supported the family of Yong Xin Huang, a 16-year-old who was shot in the back by the NYPD when he was playing with a BB gun in Brooklyn,” CAAAV Executive Director Cathy Dang told Gothamist. “It led to massive disobedience all over the city, with the community demanding the DA convict the officers. For the thirty years that we’ve been around, even in instances that don’t involve the Asian community, we’ve always stood in solidarity with the black and Latino community, who are also dealing with police violence. We see this as a systemic issue, not that of an individual, and that the larger problem is the NYPD and state violence.”

Sitting in CAAAV’s Chinatown office following the second day of the trial on Tuesday, Dang explained how CAAAV members went out to East New York for one of the earliest vigils that were put together for Gurley at the Pink Houses.

“All of our members agree that what officer Liang did was wrong. He took a life and he needs to be held accountable. From older Asian immigrants, to youth, to staff, they’re all in agreement,” Dang said.

“But there’s been pushback in some parts of the Chinese community, and we’ve gotten calls, emails, and even one person coming here to speak to me. Initially, they were saying CAAAV was on the wrong side, and he was being used as a scapegoat. Our response is very clear, we believe those demands are misguided and hurtful to the family. Everyone should come together and hold the entire system accountable. Yes, we know white officers weren’t indicted, but this just means we need to keep pushing to hold white officers accountable as well.”

Chiu, the president of the Lin Sing Association, said he doesn’t feel any ill will towards those who support the Gurley family. Several of the letters he showed Gothamist contained mentions of sadness and heartbreak for the family of the slain man.

“We can’t tell everybody to stand behind him. This is America,” Chiu said. “A lot of Chinese-Americans support the deceased’s family. There’s nothing wrong with that. We just hope the court gives him a fair trial, because that’s all we we really want.”

The PBA did not respond to repeated attempts from Gothamist for comment. Liang’s trial resumes today.

#Akai Gurley
#nypd
#Peter Liang
#original
Do you know the scoop? Comment below or Send us a Tip